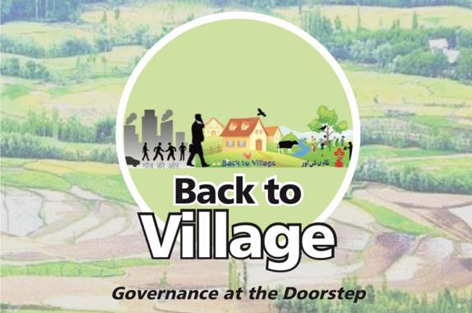 Srinagar: Jammu and Kashmir government is all set to launch the fourth edition of the Back-to-Village (B2V) programme next month with a special focus on drug de-addiction, digital governance, and rural development.

So far, the administration successfully organized three editions of the Back-to-Village programme to address the development needs of people living in the countryside.

Launched in June 2019, the two phases were completed in November that year. The third edition was held in October 2020.

In Phase-I, authorities tried to identify the development needs, Phase II focused on the format for grievance redressal and Phase III was aimed at empowering Panchayats.

Sources said the directions have already been passed to the departments for making special arrangements for the programme.

“This phase will be completely different from that of the earlier three editions. Apart from addressing development needs, this phase will focus on e-governance, sports, employment, and other issues,” sources said.

Sources said the prime area of focus during the phase-IV would be `Nasha Mukt Abhiyan’, functioning of Patwaris and Village Level Workers (VLWs), availability of officers in Panchayats, functioning of school complex system, Amrit Sarovars, Swachh Gram, formation of Youth Clubs and generation of employment in villages.

In this fourth phase, many union ministers would participate and interact with the rural population to know their concerns.

“Ministers will pay a visit and interact with the people of the grassroots level,” sources said.

“We recently had a meeting with Chief Secretary in which this programme was discussed. The dates for the programme will be finalized later,” he said.