Is Blaspheme Punishable by Death in Islam? 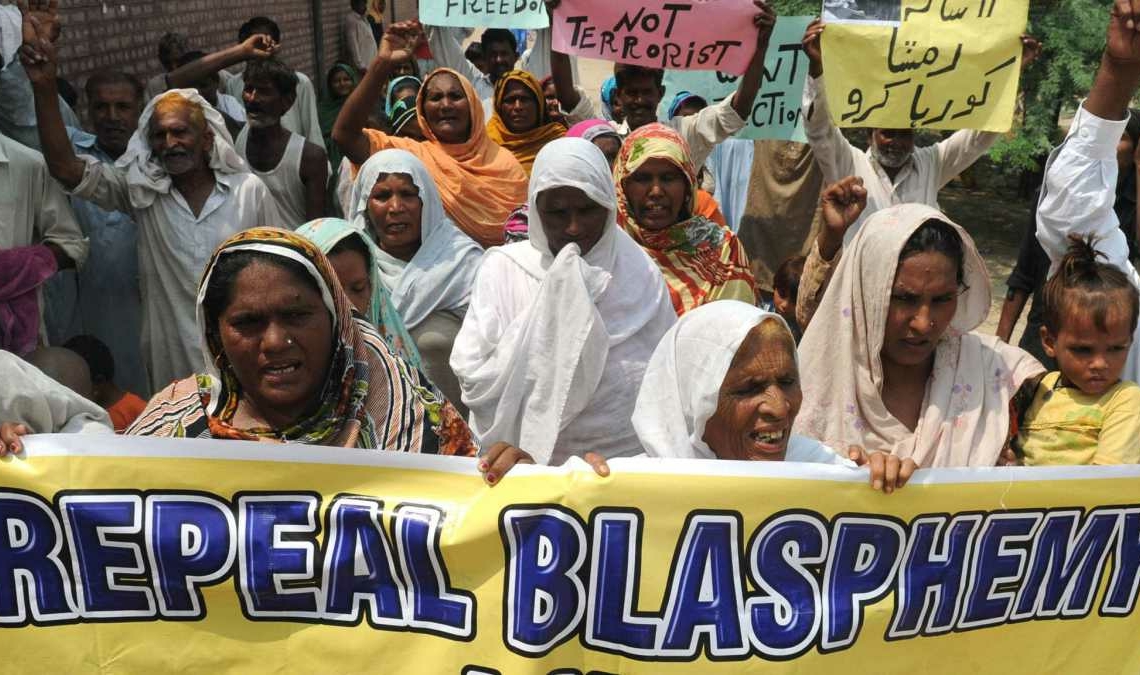 There is nothing in the Quran or the authentic teachings of Prophet Muhammad justifying the killing of people for opposing, criticizing, humiliating or showing irreverence toward holy personages, religious artifacts, customs and beliefs of Islam.

“Revile not ye those whom they call upon besides Allah,

lest they out of spite revile Allah in their ignorance.

Thus We have made alluring to each people its own doings.

In the end will they return to their Lord,

“Those who avoid the greater crimes and shameful deeds, and, when they are angry even then forgive;” [42:37]

If blasphemy was punishable by death in Islam, then the Prophet would have been the first one to order the killing of hundreds of his foes who later became his closest companions. With the exception of a very few earlier Arabs who accepted the Prophet as the Messenger of Allah , the majority of people of Makkah opposed him, humiliated him, cursed or blasphemed him or even tried to kill him, yet he preferred to practice forgiveness and to seek the divine mercy for them.

The old woman who used to throw garbage on the Prophet was visited by him when he did not see her throwing it anymore to learn that she was not well. When Suhail bin Amr, a poet who composed poetry blaspheming the Prophet was taken as a prisoner of war after the battle of Badr, the Prophet asked his companions to show kindness to him. There are examples after examples to prove that the Prophet never resorted to violence against those who were showing utter disrespect to him.

The assassination of a Pakistani Christian cabinet minister for speaking against the blasphemy law is a stab in the heart of Islam and a humiliation of the Prophet by those who claim to be his followers. Those who are supporting his killing or similar actions are the worst enemy of Islam who neither understands Islam nor respects the Prophet. No matter who they are, they must be challenged on the basis of the Quran and the teachings of the Prophet.

Unfortunately, their argument is built on a position that is supported by a good number of Muslim religious scholars all over the world that demand death for acts of apostasy and blasphemy, two of the practices that were developed under the influence of corrupt despotic Muslim rulers who misused their power to twist religious scholarship to serve their political interests.

The idea of blasphemy is foreign to Islam. It was justified by many medieval Muslim scholars on the basis of their understanding of Christian and Jewish texts supporting laws against those who blaspheme and vilify their religions.

The word “blasphemy” came via Middle English blaspheme and Old French blasphemer and Later Latin blasphemer meaning “I injure.” Based on this definition, rulers used laws to victimize non-members of and dissident members of the ruling sect or cult. Countries that had a state religion used it often to serve the interests of the rulers. In Judaism, the third book of Torah, Leviticus 24:16 states that those who speak blasphemy shall surely be put to death. The seven laws of Noah seen by Judaism as applicable to all of humankind prohibits blasphemy In Christian theology, the Gospel of Mark 3:29, describes blaspheming the holy spirit as unforgivable eternal sin. Thomas Aquinas considered blasphemy a major unforgivable sin, more grave than murder. The Book of Concord describes it the greatest sin ever committed. The Baptist Confession of Faith calls it a disgusting and detesting act. Catholic Church has specific prayers and devotions as Acts of Reparation for blasphemy against God and the Church was a crime punishable by death in much of the Christian world. In England, last blasphemy execution was that of an 18-year-old Thomas Aikenhead who was executed for the crime in 1697. He was prosecuted for denying the accuracy of the Old Testament and the legitimacy of Christ’s miracles.

The Quran and the authentic teachings of the Prophet describe the practice of showing irreverence to God and his messenger as acts of ignorance, deliberate provocation or hatred. Yet the two sources of Islamic guidance never proposed punitive action on the basis of theological dissent or religious differences or irreverence. Some Muslim jurists have, often misused the institution of ijtihad to serve the emotive interests of the people. The fatwa or religious decree issued by Khomeini proposing murder of Salman Rushdie was a personal opinion with no support from the divine guidance.

The Islamic Republic of Pakistan also has in its penal code laws that prohibit and punish blasphemy against Islam ranging from a fine to death. The Criminal courts often decide a case of blasphemy on the basis of public emotions and political interests rather than the divine writ. Pakistan’s Criminal Code has its blasphemy laws. For instance, code 295 forbids damaging or defiling a place of worship or a sacred object, code 296A forbids outraging religious feelings, code 295 B forbids defiling the Quran, code 295 C forbids defaming Prophet Muhammad.

Defiling the Quran is punishable by imprisonment for life and defaming Prophet Muhammad by death with or without a fine. None of these codes have any basis in the Quran or the authentic teachings of the Prophet. It is a position that many scholars adopted under the influence of despotism that prevailed in the Muslim world for centuries and still prevails in many countries. This position is rarely challenged by those who claim to have knowledge of the Quran and Sunna. Often, they use their religious authority to suppress debate on the issue.

The tyranny of religious scholars is so intense that those opposed to these laws are condemned as non-Muslims punishable by death. Some of the scholars even encourage their followers to unleash terror against such people. Their arrogance has reached to a point that they do not want to listen to any argument based on the Quran and the teachings of the Quran. The religious and educational institutions of the Muslim world suffer from the tyranny of these scholars who justify their ignorance and arrogance on the basis of a literature that emerged at a time, when Muslims had lost connection with the Quran and by and large were at the mercy of despotic rulers and their hired religious scholars.

The un-Quranic and un-Prophetic practices adopted by many Muslims scholars must be challenged. Islam is not the monopoly of self-imposed scholars. It is a faith given to people for their well being and guidance without any interference from any authority other than Allah, the almighty. Those who assume the divine role in condemning people and deciding their life and death must be challenged and what better way than to seek the repelling of blasphemy law in light of the Quran and Sunna.

If Muslim religious scholars are seriously concerned about the sensitivities of people with regards to their faith and its holy figures, then they should advocate common laws for every religion and religious community emphasizing that respect must be shown to all religions and freedom of speech must not be seen as a license to hurt and provoke others.