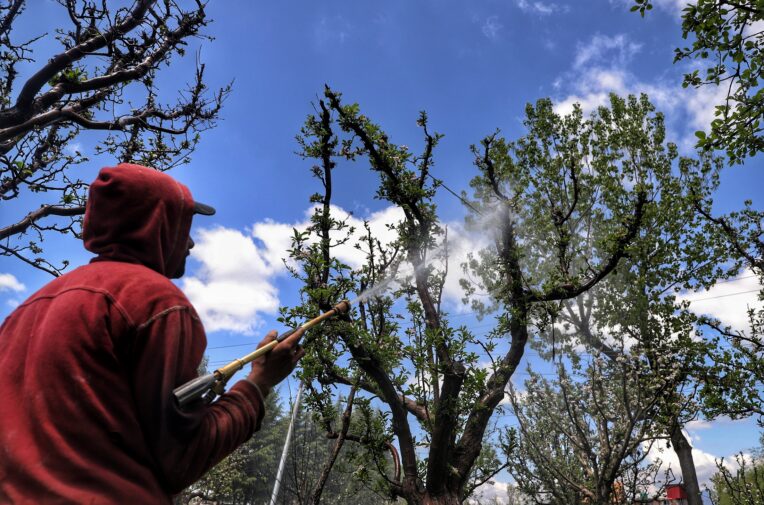 Srinagar: Abdul Hameed, the 60-year-old farmer from Shopian, developed respiratory problems last year after he returned from his orchard.

Hameed had sprayed pesticide hours before he complained of breathlessness. He was immediately rushed to the hospital and doctors concluded that he suffered the attack because of his exposure to harmful pesticides.,

“Since then he has to come for regular check-ups. The widespread use of pesticides by the farmers to control the insects, pests, and fungus and to enhance the crop and fruit production is turning out as a major chemical health hazard in them as they come in its direct contact,” the doctor treating him at SMHS Hospital, Srinagar said.

Organophosphates pesticides are commonly used in the agriculture industry in Kashmir which may lead to high background exposure.

It was found that OP exposure affects the nervous system followed by musculoskeletal, integumentary, and respiratory systems with the least impact on the cardiovascular system.

A resident doctor at SMHS Hospital, Srinagar, said many of the pesticides have been associated with health and environmental issues.

“Exposure to pesticides can be through contact with the skin, ingestion, or inhalation. The type of pesticide, the duration and route of exposure, and the individual health status (e.g., nutritional deficiencies and healthy/damaged skin) are determining factors in the possible health outcome. Within a human or animal body, pesticides may be metabolized, excreted, stored, or bio-accumulated in body fat,” he said.

The doctor noted that the numerous negative health effects that have been associated with chemical pesticides include, among other effects, dermatological, gastrointestinal, neurological, carcinogenic, respiratory, reproductive, and endocrine effects.

Senior Assistant Professor, Department of Geoinformatics, University of Kashmir, Dr. Irfan Rashid said the demand for chemical fertilizers and pesticides increased over the years as huge chunks of agricultural land are converted to horticultural purposes in Kashmir for higher productivity.

“Consequently, when you want a higher yield, you will press for similar measures which will expedite the crop growth,” Rashid said.

He emphasized that by following the concept of ‘Integrated nutrient management”, the overuse of chemical fertilizers and pesticides can be controlled.

“Under this concept, if a particular crop demands 100 percent of the fertilizers. The farmers are told to use 75 percent of it and keep compensating the 25 percent with organic fertilizers like crop residues, manure, and vermicompost. This will save the farmers from pesticide exposure and simultaneously restore soil nutrients, especially nitrogen, phosphorus, and potassium and ramp up output without compromising with the quality,” Rashid said.