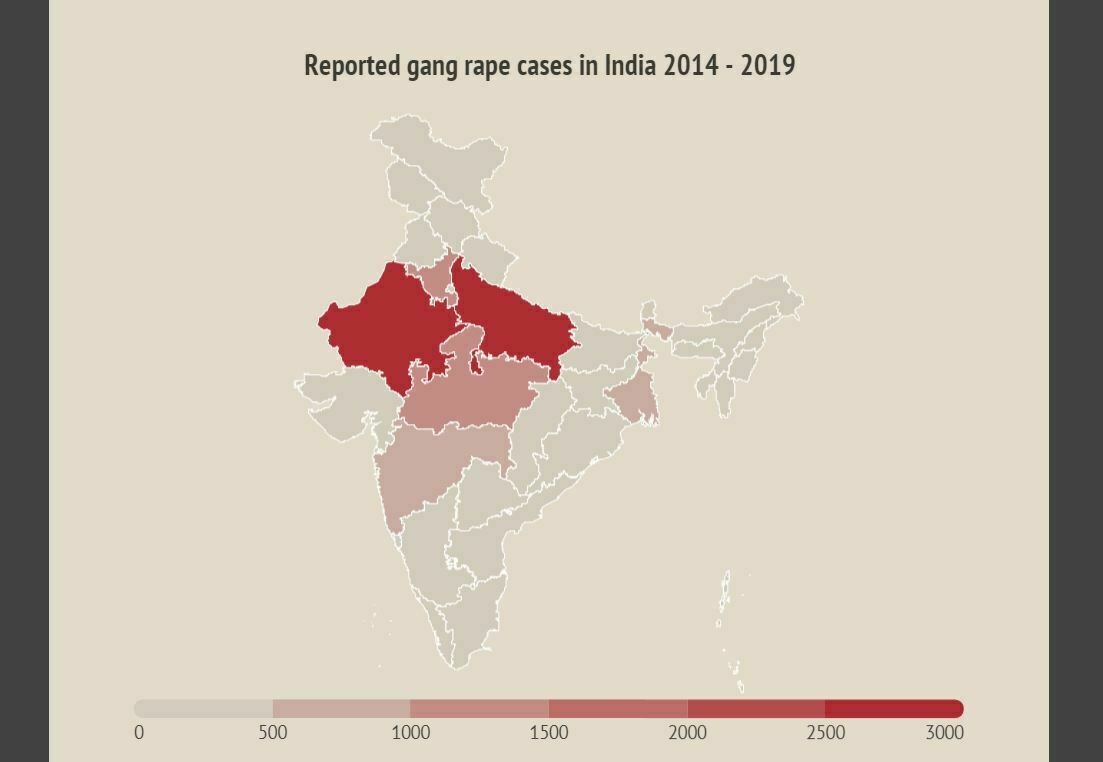 The recent incidents of alleged gangrape and murder of a 19-year-old woman in Uttar Pradesh’s Hathras, and a 22-year-old woman in Balrampur has left the country baffled, reigniting the subject of women’s safety. However, the issue of gangrape is hardly new to the country, and has been symbolic of the violence faced by women in India since the Nirbhaya incident in Delhi in 2012 Since 2014, The National Crime Records Bureau started including data on gangrapes in the country, which has painted a particularly sombre picture for India’s Hindi belt.

Prevalence of gangrapes in Hindi belt

Last year, 6% of all reported cases of rape were under gangrape. While the number of reported gangrapes since 2014 has seen a steady fall, in 2019 there was a 6% rise in such cases from the previous year.

Custodial Rape And Murder With Rape Uttar Pradesh painted a particularly grim picture – having only 17% of India’s female population, it accounted for 72% of all reported rapes of women in custody (by police, armed forces, public servants, hospital staff, jail staff) since 2014.

Last year, Maharashtra had the highest number of reported murder with rape/gangrape (47 cases), followed by MP (37 cases), UP (34 cases), Assam (26 cases) and Karnataka (23 cases). Also Read:Unlock 5.0 Guidelines: Back To The Movies At 50% Capacity

No Country For Women In 2019, 87 cases of rape were reported everyday in the country, while crimes against women saw an increase of 7% from the previous year. But this hardly paints an accurate picture of sexual violence faced by women in the country with most cases going unreported.

In 2006, the NCRB reported stated that around 71% of the rapes in India go unreported. A 2013 study by professors at University of Texas put this figure at an estimate of 54%. In reality, such an estimate will be hard to arrive at, given the complexities in conducting surveys on rape.

Furthermore, marital rape is not considered a crime in the country and thus it is nearly impossible to find an actual figure of this decriminalised crime in the country. However, past studies have shown that most rapes are carried out by someone known to the victim, which frequently includes intimate partner. (courtesy: www.boomlive.in)