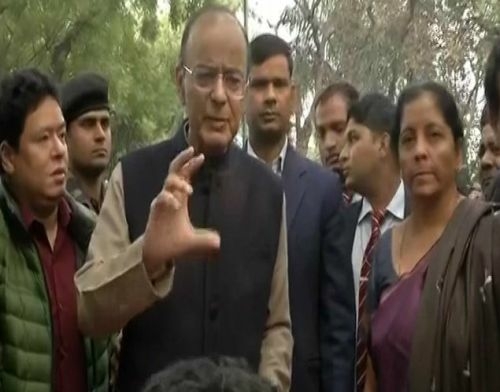 New Delhi, Feb 15: India on Friday announced that it had decided to withdraw the Most Favoured Nation (MFN) status granted to Pakistan and would also take all possible steps to isolate the country at the international level after Thursday’s car bomb attack in which at least 49 CRPF men were killed in Kashmir.
Briefing the press after a meeting of the Cabinet Committee on Security (CCS), Minister Arun Jaitley said outside Prime Minister Narendra Modi’s residence that the Ministry of External Affairs would announce the diplomatic steps to be taken against Pakistan.
A notification would be issued by the Commerce Ministry withdrawing the MFN status.
Jaitley announced that the government would call for an all-party meeting after Home Minister Rajnath Singh returned from a visit to Kashmir.
Speaking at a public function just after Jaitley’s briefing, Modi assured people that the perpetrators of the attack would be punished.
He said it was important that the country spoke in one voice after the strike.
The CCS meet morning was chaired by the Prime Minister. Rajnath Singh, Jaitley, Sushma Swaraj and Nirmala Sitharaman were present at the meeting.
Top security officials are learnt to have made a presentation on the incident and the overall security situation in the State.
Pakistan rejects any link to CRPF convoy attack: India on Friday summoned Pakistan’s top envoy and lodged strong protest over the killing of 49 CRPF soldiers in the Pulwama militant attack carried out by Jaish-e-Mohammad (JeM).
JeM claimed responsibility for the attack that left at least 49 CRPF soldiers dead and many others critically wounded.
Foreign Secretary Vijay Gokhale summoned Pakistan High Commissioner to India Sohail Mahmood and lodged strong protest over the killing of the CRPF soldiers in Pulwama, official sources said.
Pakistan has denied any involvement in the attack that claimed the lives of 49 CRPF troopers in Jammu and Kashmir.
The Pakistani Ministry of Foreign Affairs said in a statement that the attack was a matter of “grave concern” and it had been condemning “heightened acts of violence in the (Kashmir) Valley”.
“We strongly reject any insinuation by elements in the Indian government and media circles that seek to link the attack to the State of Pakistan without investigations,” said the statement.
Reports said that India has called its High Commissioner to Pakistan Ajay Bisaria to New Delhi “for consultations” in the wake of attack on the CRPF convoy.