India-Pak border thaw: Construction of community bunkers to speed up along J&K LoC 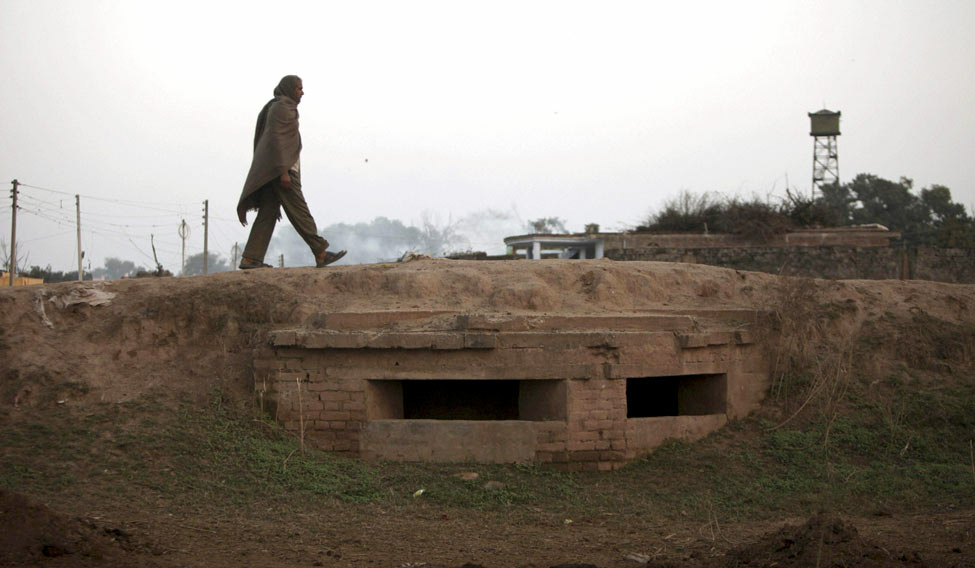 A farmer walks by a bunker near the India-Pakistan International Border fencing at Suchet Garh, near Jammu (Courtesy: PTI)

Srinagar: Focus has now shifted to the construction of underground community bunkers in the civilian areas along the Line of Control (LoC) after India and Pakistan agreed to uphold ceasefire on the borders in Jammu and Kashmir.

Officials have directed the ground staff to speed up the construction work so that the underground bunkers are completed within the stipulated timeframe.

“We will expedite the work. Earlier work was getting hampered due to the shelling. Now we will complete the target within the stipulated time,” Imam Din, district development commissioner, Kupwara told The Kashmir Monitor.

Official figures reveal that out of the 170 community bunkers approved for border areas in Kupwara, 100 have been completed. “Work has been restarted on the remaining 70 bunkers. These bunkers are being constructed in Keran, Karnah, and Machil tehsils of the district,” said Imam.

Each underground bunker will accommodate 20 to 25 people. The design and layout of bunkers have been made in such a manner that they will withstand the shells. The highlight of bunkers will be the double RCC slab which will be covered with five feet of sand and mud so that the shells do not penetrate inside.

In addition, the government has also sanctioned 1000 individual bunkers for the Kupwara district. “Process is on to identify the places where these bunkers will be constructed. We hope to complete the process very soon,” said Imam.

Similarly, the construction of bunkers in the Poonch district is going at full speed. “We have completed work on more than 1000 bunkers. Now work on 200 bunkers is going on and it will be completed soon. More than 90 percent of funds have been expended,” Rahul Yadav, district development commissioner, Poonch, told The Kashmir Monitor.

Figures presented in the parliament reveal that there were 5,133 ceasefire violations along the Line of Control (LoC) in 2020, in which 46 people lost their lives. Till January 28, 2021, 299 violations were reported on the LoC.

Data reveal that there have been 3,289 ceasefire violations along the Indo-Pak border in 2019. In 2018, Jammu and Kashmir had recorded 2,936 instances of ceasefire violations by Pakistan with an average of eight cases daily, in which 61 people were killed and over 250 injured.

The number of ceasefire violations was three times more than that of 2017 when 971 cases were reported. In 2017, 31 people — 12 civilians and 19 security forces personnel — were killed and 151 others suffered injuries.