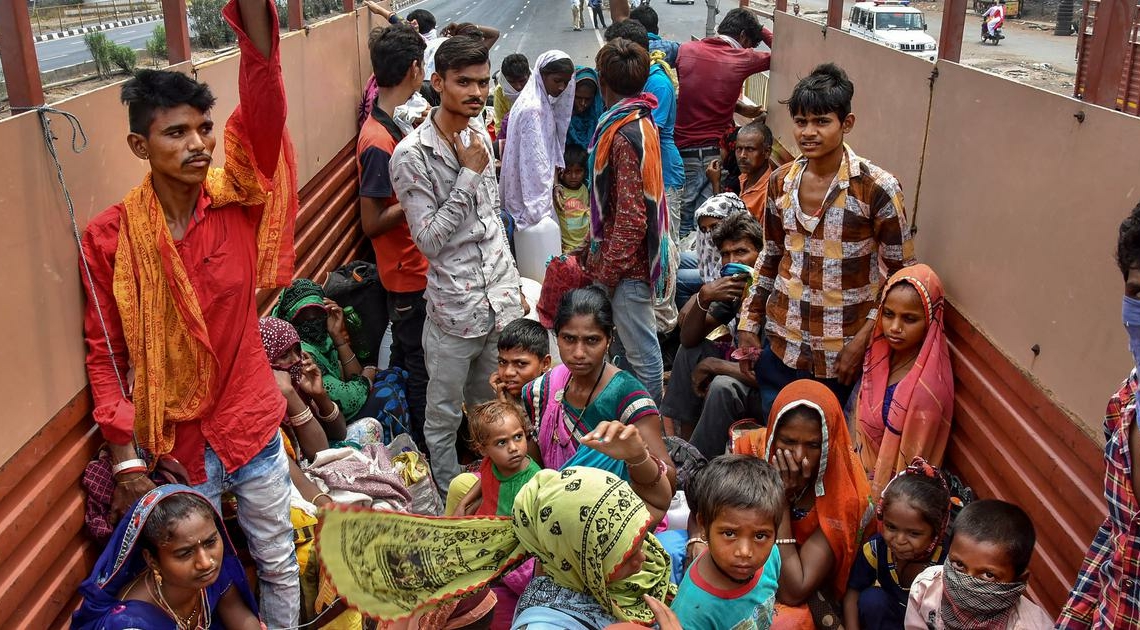 Srinagar: Majority of the vulnerable sections of the society in India have lost jobs, do not have enough ration to last a week, and are eating lesser than before to cut costs, a survey has revealed.

The survey, by the Azim Premji University’s Centre for Sustainable Employment (CSE), was conducted between April 13 and May 9, and made public on Tuesday. It was a survey of 3,970 persons in urban and rural pockets in 12 states, carried out through civil society organisations, and has thrown up some worrying results that could have impact on nutrition and health of citizens.

According to it, India has seen a whopping 67 per cent people among the vulnerable sections lose their jobs, and a 63 per cent dip in earnings during the Covid-19 lockdown. What’s more shocking is that nearly 74 per cent — almost three out of four surveyed — said they had started eating lesser than before to cut costs and 61 per cent households did not even have enough money to buy a week’s ration, the survey reveals.

It was a purposes-sample survey that specifically covered only vulnerable sections of the population, mostly from the unorganised sector, a significant number of them with incomes lesser than Rs 10,000 a month. The loss of job or income was more or less uniform among casual workers, as well as regular salary earners, apart from self-employed people.

“Given the circumstances, it was desirable that we speak to the bottom run, the most vulnerable sections, and we wanted to know what was happening with these people. These were identified through these civil society organisations that we worked with,” said Dr Rosa Abraham, Research Fellow at the CSE. The survey focused on three broad areas — impact on their work/employment, impact on their households and access to government relief.

“Health is a medium-term impact. Most of them (those surveyed) reported they can’t afford to buy beyond a week’s worth of food —food intake is definitely compromised, they have reported they reduced the quantity of meals. In the medium and long-term, this will have a nutritional impact. And girl children will be first impacted, this is something that is worrying,” Dr Abraham told News18 in an interview.

The positive in the survey was that as many as 86 per cent of them had received government rations, though less than half of them had received any direct cash transfer. This was primarily because a large section — more than 60 per cent in both urban and rural areas — reported that they did not hold Jan Dhan accounts.

Job loss was higher in urban areas (an average 80 per cent) than in rural areas (about 58 per cent). About 43 to 57 per cent wage workers have received no or reduced salary during the lockdown period, while a whopping 90 per cent of farmers could not sell their produce at full prices.

The 50 days of lockdown will set them back significantly, Dr Abraham said.

“Most of these households earn less than Rs 10,000 a month, while a substantial sample (about 20 per cent) earn just between 2,000 and 5,000 a month. They are living day to day. Almost half the sample size has had to take loans because of this crisis, and there are also people who had prior loans. So not having a month’s income puts them back in the immediate sense, that even for day-to-day essentials they have to compromise. But in the long-term, too, they will have huge liabilities. So, it will put them back severely unless they get some relief,” she said.

Though it is not expected to impact education as there is enough awareness now for families to send their children to school, there is also the possibility that they may have to make a compromise on this when push comes to shove and, inevitably, girl children may be impacted more, she felt.