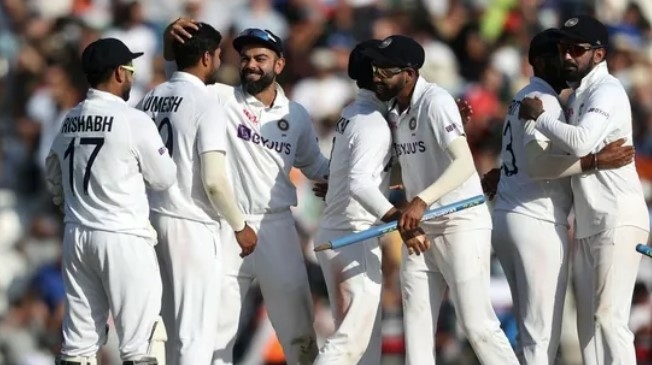 London: A menacing Jasprit Bumrah joined forces with a canny Ravindra Jadeja to decimate England by 157 runs in the fourth Test as India took a 2-1 lead in the five-match series, here on Monday.

The Indian bowling attack was without two of its senior pacers Ishant Sharma and Mohammed Shami but was still potent enough to bowl out England for 210 in 92.1 overs.

The hosts were chasing a tough target of 368.

Perhaps that was the reason that India’s man-of-the-moment Shardul Thakur’s (8-1-22-2) off-cutter was dragged back onto the stumps by Root, signalling the end of English resistance.

Umesh Yadav (18.2-2-60-3) then completed the formalities with the second new ball as India won two Test matches in a single series in England after a gap of 35 years.

Virat Kohli had said after the third Test that a win at Lord’s didn’t guarantee a win at Leeds and a humbling defeat at Leeds didn’t mean that tables could not be turned at the Oval.

The skipper’s thoughts were vindicated by his team with an all-round performance—Rohit Sharma showing steely temperament, Shardul Thakur giving it his all knowing that chances may be far and few.

Umesh showing that he is no less effective than team management’s first choice quartet of pacers.

As far as Jadeja was concerned, he answered all the pro-Ashwin backers on his and Virat Kohli’s behalf. He hit the rough created outside the left-hander’s off-stump as his skipper had assessed at the toss.

He started the slide making Haseeb Hameed (63 off 193 balls) pay for his ultra-defensive tactic with a classic left-arm spinner’s dismissal.

Using the rough outside the leg-stump of the right hander, he landed one on the spot as the opener prodded forward for a defensive stroke but the ball turned enough to evade the bat and hit the top of the off-stump.

Then it was Bumrah’s turn to unleash his sharp incoming reverse swinging deliveries with a lethal mix of yorkers for Ollie Pope (2) and Jonny Bairstow (0), who couldn’t stop their defence from being breached.

Pope got one that came in sharply at a brisk pace which also ensured the quickest 100th Test wicket for India’s most prolific all-format fast bowler in the last decade. But the ball that got Bairstow was even special as it would have made someone like Waqar Younis proud.

It moved in the air and dipped at the right time to york Bairstow and leave England in tatters.

In that same over, Bumrah bowled another menacing yorker that Root just about managed to dig out.

The legendary Shane Warne termed it as best fast bowling spell during the English summer and that too on a flat deck.

“Take a bow Jaspritbumrah9! That spell of 6.3.6.2 was outstanding and the spell of the summer so far. A class above any other fast bowler in this test match on a flat wicket ! Outstanding,” Warne tweeted.

If that was not enough, Moeen Ali became a “walking wicket” as he trapped himself into the set plan with Jadeja again landing on the rough outside the left-hander’s off-stump.

The extra bounce meant that it hit the shoulder of the blade and Suryakumar Yadav, substituting for Cheteshwar Pujara at short leg, took an easy catch.

India certainly got in driver’s seat by lunch with those first two wickets and Hameed’s approach didn’t help England’s cause either.

Thakur, who was disappointing in the first innings provided the breakthrough in the 41st over after a partnership of 100 runs, the first against India in the fourth innings in 58 years.

Thakur bowled one fuller and it moved a shade away taking the outside edge of the Burns’ bat as he squared up.

Dawid Malan (5) was looking solid in defence till Hameed misjudged a single, tapping a Jadeja delivery to short cover where substitute fielder Mayank Agarwal picked and threw in one action that found Malan short of his ground much to the joy of visitors.

For Hameed, who is nicknamed Baby Boycs after Geoffrey Boycott for his stodgy batting, was not even ready to dispatch the loose half volleys to the boundary as only six fours came off his bat.

The scoreboard pressure that his batting put went a long way in India getting a stranglehold in the second session to eventually close the game.

Side effects of online classes