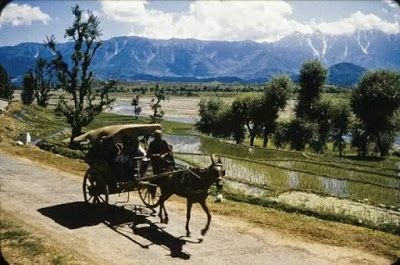 Srinagar: For the last 10 years, Mohammad Ramzan, 60, had switched over to farming after his Tonga (horse cart) services became redundant with the advent of modern transport.

Last time he pulled his Tonga was in 2016 when he ferried a pregnant woman from his native village to the nearby hospital as there was no transport available given the groundswell that ensued the killing of Hizbul Mujahedeen commander Burhan Wani.

On Thursday, he, however, returned to his old avatar of being a Tongawala as Kashmir has come to a grinding halt after the abrogation of Article 370 on August 5. Shops and business establishments are shut and public transport is off the roads.

“I feel happy that my services bring some respite to the people who wait in scorching heat for a cab. Frankly speaking, I am not sure whether I will continue with this service.  But one thing is clear that I will be operating Tonga till situation improves,” he said, refusing to be photographed.

Welcome to Kashmir post Article 370, obsolete Tongas have reappeared on the north Kashmir roads as public transport continues to remain off the roads across the valley.

Around half a dozen Tongas are currently operating in North Kashmir’s Pattan to ferry people from main town to the nearby villages. Similarly, a few horse carts also operate from Palhalan to Goshbug and Naidkhai areas where public transport services have come to a halt.

Tongawalas said they don’t face any trouble in ferrying the passengers. “What will they break? We don’t have window pans,” quipped Ali Mohammad, a Tongawala. “We mostly ferry people who are in dire need of medical attention or any other emergency.”

Tonga service has also been extended to newer areas in the apple rich town of Sopore. “Very few Tongas used to ply from main Sopore town to Noorbagh. But for the last one month Tongwalas have extended their services to other villages as the area remains shut with no access to public transport,” said Muneer Ahmad a local  shopkeeper.

Govt kicks off process to identify vacancies in different departments