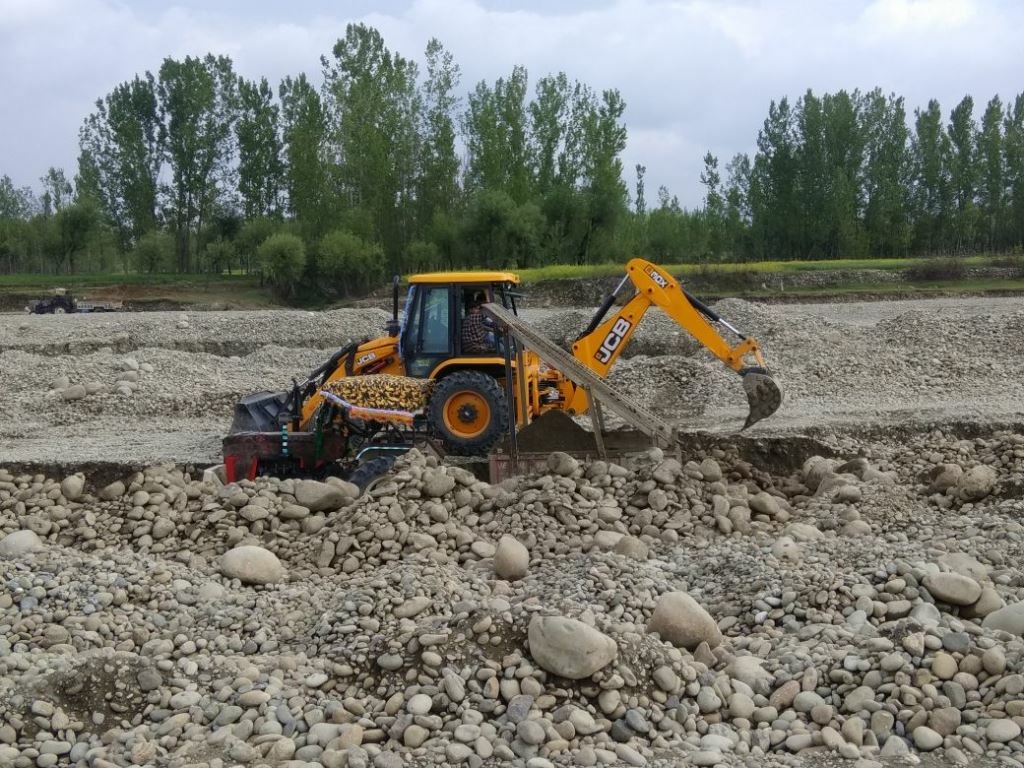 Even after a video about unauthorized mining from the Shadhole stream became viral, no action has been taken by the Departments of Geology and Mining, Forests, Ecology and Environment, Wildlife Protection, Pollution Control Board, Fisheries, and others.

Most officials feigned ignorance about the video, knowing well that it has not been doctored. This is not an isolated incident or rarest of rare. But entire Indus basin that runs through the J&K has been subjected to illegal exploitation of minerals. Not a single river, stream tributary, nallah has been spared. The Department of Geology and mining is more interested in the extraction of minerals from river beds. Even for minor mineral extractions, basic fundamentals are not being taken into the consideration. Neither a detailed survey of the river/stream is conducted nor its hydrologic behavior is taken into account. It takes a minimum of a couple of decades to arrive at its potential and replenishment capacity. Under rules, the extraction aspect has to be carried and monitored exclusively by a mining engineer, not a geologist or civil or mechanical engineer. But the department is not adhering to the rules that are the main cause for wanton destruction of the ecology.

Ministry of Environment, Forest, and Climate Change has issued Enforcement & Monitoring Guidelines for Sand Mining in January 2020. But the rules have been thrown to the wind. The guidelines clearly state that the public should be involved. Most of the officials in the Geology and Mining department are not aware of these rules. The NGT has Inter-alia observed: “There can be no two views that an effective institutional monitoring mechanism is required not only at the stage when Environmental Clearance is granted but also at subsequent stages. We are of the view that all the safeguards which are suggested Enforcement & Monitoring Guidelines for Sand Mining in sustainable sand mining guidelines as well as notification dated 15.01.2016 ought to be scrupulously followed.”

It is a known fact that in spite of the above-suggested guidelines being in existence, on the ground, illegal mining is still going on. The existing mechanism has not been effective to curb illegal extraction.

Since there is an utter failure in the current monitoring mechanism followed by the State Boards, SEIAAs and DEIAAs, it is required to be revised for effective monitoring of sand and gravel mining, and a dedicated monitoring mechanism is set up. In Original Application No. 481/2016, the allegation is that there is the connivance of the District Administration with the miners and mining is going in violation of Environmental Clearance rules.

Sediment is necessary to the development of aquatic ecosystems through nutrient replenishment and the creation of beneficent habitats and spawning areas. Unscientific mining has been the major cause that destroys fish-breeding and reduces its population. When mining from, within, or near a riverbed is carried. it has a direct impact on the physical characteristics, such as channel geometry, bed elevation. It also results in reducing groundwater table discharge.

Some of the rivers are being mined so aggressively that they are losing minor minerals at a rate 40 times larger than the natural replenishment. The extraction in these rivers decimates the ecology of the rivers, both in the water and on the banks. Habitats, river courses, water tables have been altered by the rapid removal of minor minerals creating massive environmental implications.

The water resources in Jammu and Kashmir have already started depleting. Most rivers, tributaries, streams brooks, lakes, wetlands, and ponds are under severe stress. The river is a living ecosystem both scientifically and biologically. It has been given the status of a living person who enjoys all the rights, duties, and liabilities of a living person. Water from the rivers is a basic natural resource essential for various human activities and countries’ economic growth. Rivers provide irrigation, navigation, healthy ecology, environment, aquatic habitat, and livelihood.

This esteemed Newspaper had carried a write up about this sordid affair on December 15, 2020. Headlined `Criminal Nexus thrives: Government turns Nelson’s Eye’, the article tried to highlight a nexus between mafia and the caucus of the Departments, from the Revenue, Mining, Police, Pollution Control Board, Forests and the Panchayats.

This official nexus is like a well-oiled machine which illegally extracts minor minerals including Sand, Bajri, and Boulders worth crores from the river beds. The matter was brought to the notice of the Anti Corruption Bureau K and CBI Jammu, months back, but the situation on the ground has not changed.

In another interesting development, Wildlife Department has jurisdiction beyond protected areas only when human-wildlife conflict, (HWC) occurs.  Should it be construed that aquatic wildlife has not to be protected at all? Such illogical reasoning makes this writer to refer that in the world’s first international conference for the protection of the Wildlife held in 1951 in New Delhi. Pandit Jawaharlal Nehru in his maiden presidential address said: “This beautiful big cat (referring to White Tiger) whom man could not tame hence declared this animal as wild. Should these innocent animals ever come to know we men behave like; God alone knows what they call us”.

Ironically even after seven decades, these words hold true in Jammu and Kashmir. Rules are framed by humans to protect themselves not wildlife. The department of Fisheries say it is not being consulted at any stage for mining in rivers or other water bodies.   Better to sum up with the words of Albert Einstein: “The world will not be destroyed by those who deal, but those who watch them without doing anything”.

(The writer is a Jammu based Environmentalist)