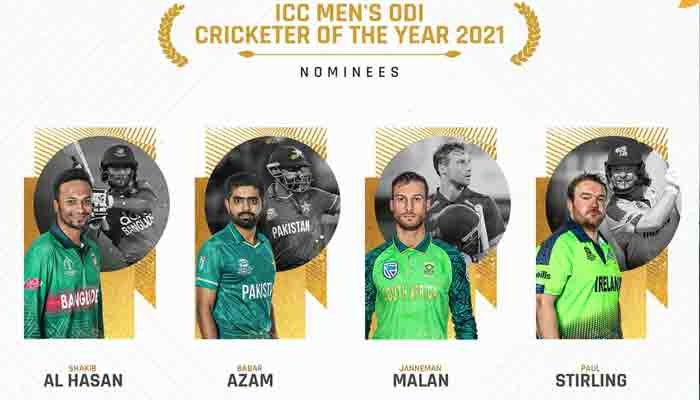 Pakistan skipper Babar Azam has been nominated for the ICC’s Men’s ODI Player of the Year Award.

Azam and Bangladesh all-rounder Shakib Al Hasan are among the four players nominated for the ICC’s Men’s ODI Player of the Year Award.

Babar amassed 228 runs in 3 ODIs and played a key role in Pakistan’s victory against South Africa. The right-handed batter accumulated 177 runs in a three-match series against England, but the team lost 0-3.

However, Shakib scored just 19 runs and snared three wickets in a three-match series against Sri Lanka.

South Africa’s Janneman Malan and Ireland’s Paul Stirling are the other two cricketers.

Paul Stirling scored 705 runs and finished 2021 as the highest run-scorer in ODIs this year.

Janneman Malan played his first game of the year against Pakistan. Despite his knock of 70 runs, South Africa lost the third and final game of the series. He won the Player of the Series award in the three-match series against Ireland after finishing as the top-scorer with 261 runs in two ODIs.

Janneman was on song against Sri Lanka and ended the series as South Africa’s highest run-getter with 162 runs.

No Indian player has been nominated for the awards this year. Despite good performance, Pakistani captain Babar Azam has been excluded.  However Pakistani wicket-keeper Mohommad Riawan has made it to the list.

Doctors speak: What precautions ought to be taken to keep Omicron at bay?