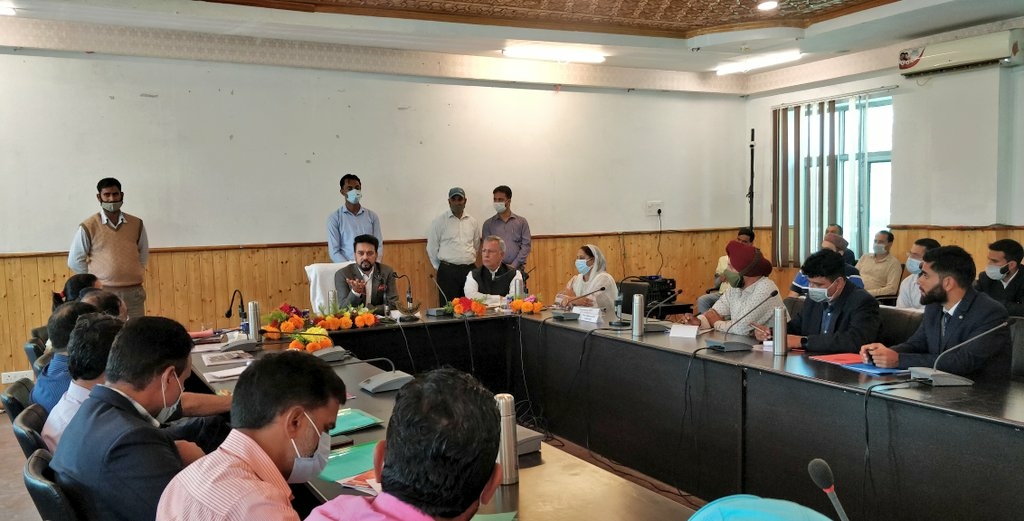 Srinagar: Two-day visit of Union Minister for Information and Broadcasting and Youth Affairs and Sports, Anurag Singh Thakur to Ganderbal concluded on Monday.

During the meeting, Deputy Commissioner, Krittika Jyotsna gave a brief overview of the developmental activities and achievements of the district through power point presentation. She also briefed the minister about Covid mitigation efforts and progress on various beneficiary oriented schemes in the district.

While reviewing Covid-19 scenario in the district, the Minister said that 3rd wave of Covid could be mitigated if more awareness is generated among the masses and stressed for vigorous vaccination drive throughout the district.

He also urged the officers to join the country wide month long “Clean India Mission” starting on October 01, 2021 during which 75 lakh kgs waste would be collected throughout the country.

While reviewing progress under MGNREGA, the Minister said that works shall be taken as per the priority of the locality and thrust shall be on rural connectivity and other works that can generate more working days.

While reviewing the progress made under various schemes, the Minister appreciated the district administration for its achievements in various beneficiary oriented schemes and asked the officers to work with dedication and fix targets and timeline for all round development.

Meanwhile, the minister met DDCs, BDCs, ULBs and PRIs who put forth various demands pertaining to the development of their respective areas before the minister.

While interacting with the PRIs, the minister urged them to create awareness about Beneficiary Oriented Schemes among masses which are launched to provide financial assistance to the poor.

Replying to the issues and developmental needs raised, the Minister thanked the elected members for highlighting the development needs particularly development of sports and said youth of the UT is much focused towards sports and Union Government would ensure all support to UT administration in its endeavours to nourish the talent of the youth. He assured that grievances raised would be discussed with the concerned departments so that the same may be fulfilled in a better and effective manner.

While replying to the issue of drinking water scarcity in upper reaches of ChountWali War, the Minister maintained that Jal Jeevan Mission is envisioned to provide safe and adequate drinking water through individual household tap connections to all households in rural India and directed the concerned that necessary steps shall be taken on priority to provide drinking water facility in affected areas of the district.

The sports delegation apprised the minister about the current sports facilities available in the UT and put forth various demands for further development of sports culture in whole UT which include sports industries in J&K, development of existing sports infrastructure, indoor multipurpose training halls at block level, High Altitude training centre, etc.

He said that 40 centres are approved under Khelo India scheme in UT in which necessary training will be given to the youth as per their talent and interest in particular sports besides various other programs are in pipe line to provide scientific training to the sports persons, he said.

While replying to the demands raised, the minister said that it is encouraging that people are focused towards sports which is pride for whole nation and assured all support for development of both winter and summer games in the region.

Earlier, the minister paid obeisance at Kheer Bhawani Shrine, Tulamulla and prayed for happiness, prosperity and well-being of all.