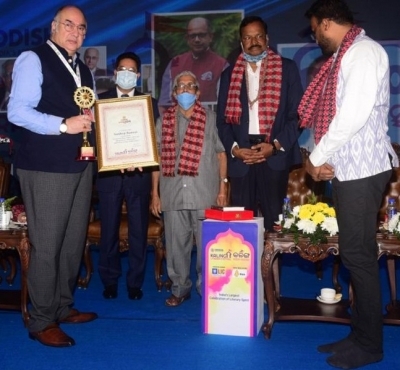 Bhubaneswar: Sudha Murthy, wife of Infosys founder Narayana Murthy, business journalist Tamal Bandopadhyay and Bollywood actress Divya Dutta were among others who received awards for their books on the inaugural day of Kalinga Literary Festival (KLF) 2021 in the temple city of Bhubaneswar.
For non-fiction category, IANS CEO and Editor-in-Chief, Sandeep Bamzai’s book “Princestan: How Nehru, Patel and Mountbatten Made India” was selected as Book of the Year.
Odisha Tourism Minister Jyoti Prakash Panigrahi inaugurated the festival. Nepal’s Charge d’affaires Ram Prasad Subedi, Padma Vibhushan Sitakanta Mohapatra, Padma Bhusan Ramakanta Rath graced the inaugural ceremony.
KLF has emerged as one of the leading literary platforms in India, attracting both experienced and young litterateurs. Bigger than ever before, the eighth edition of the festival will bring nationally and internationally acclaimed names on one platform to discuss, debate and explore commonalities in the diverse voices in literature, said Rashmi Ranjan Parida, the founder-director of the festival.
A total of 30 awards were given away to eminent authors and translators of repute by the organisers of the KLF on its eighth edition held here.
Padmashree Srinivas Udgata was awarded with Kalinga Literary Award and Arun Kamal was awarded with Kalinga Literary International award.
Tamal Bandopadhyay was awarded best writer in the Economy category for his book “Pandemonium: The Great Indian Banking Tragedy”.
For the Children’s literature section, Sudha Murty was selected for her book called “Grandparents’ Bag of Stories”.
Bollywood actress Divya Dutta was awarded as the Women Writer during the event.
Former West Bengal Governor Gopal Krishna Gandhi was selected for his book on Mahatma Gandhi. Rashid Kidwai’s book “Bharat Ke Pradhan Mantri” was selected for autobiography category.
The three-day extravaganza of literature, art, culture and conversation will feature poetry sessions, panel discussions and talk shows and many more in about 50 sessions.