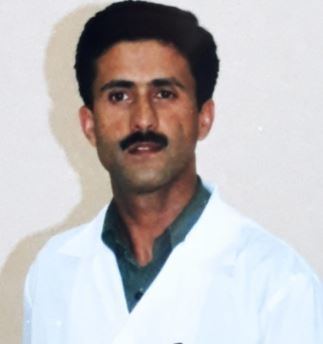 Srinagar: Nursing supervisor Riyaz Ahmad vividly remembers the day when the first COVID patient gifted him a book about the philosophy of life and death in Islam.

Flashback of the patient still plays in Ahmad’s mind.  His tayammum with soil preserved in a clean pot and the namaz he offered on the hospital bed is etched on his memory.

“I can’t forget the day when the first COVID patient landed in the hospital. There was a stoic silence. People were so scared. But the patient was so calm and composed. He had brought soil in a pot which he used to keep by his bedside. Since he could not move, he was performing ablution from the soil and offering namaz. Later he gifted me a book which is like a treasure trove,” said Ahmad, who is in charge of ICU at Government Chest Disease (CD) hospital.

For Ahmad, serving critical COVID patients has not been less than a religious duty. From receiving the first patient to treating highly infected people, Ahmad has seen it all. For his selfless duties and indomitable courage, he was conferred with a special award on this Republic Day.

“I remember when the first patient died. I along with two newcomers entered the ward to pack him in the special bag and put him into the coffin. He was a little bit bulky and it was hard to pull him up. We needed more hands but had none. Somehow we managed. It was a life-changing experience for me,” he said.

If it was not enough, the rumours spread thick and fast creating a tricky situation in the vicinity. Entire Buchwara and Dalgate were shut and people stayed indoors fearing infection.

“When we packed the body, the news spread in the area. Shopkeepers downed their shutters and streets were deserted. We were shell-shocked,” said Ahmad.

Despite dodging the virus, it finally caught up with him in the summer of 2020. Such was his dedication that he joined back his duties only after 10 days.

“We are seven family members and all of them were infected. My mother is comorbid. She too was infected. Thank God, we did not need hospitalization. After I tested negative, I was back to ICU discharging my duties,” he said.

What kept Ahmad going was unflinching support from his family despite knowing the risks involved. “Once I told my family that I will be staying in a separate room and do chores myself because of the nature of duty. They refused, saying we will face everything together. That raised my morale. Even my seniors told me that if I wish I can recuse from COVID duties since I am also comorbid and tested positive once. But I refused. It has been more than a year that I am still serving COVID patients,” he said.