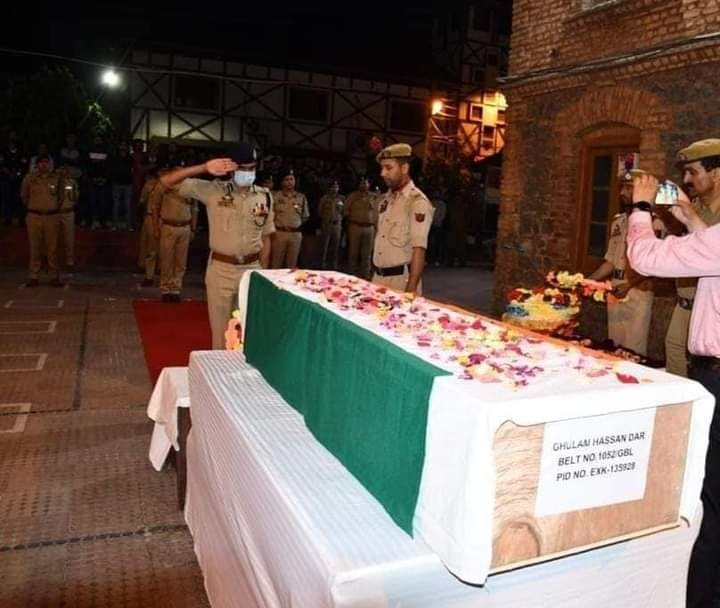 SRINAGAR:  Hundreds of people participated in the funeral procession of constable Ghulam Hassan Dar who was shot dead on Saturday.

Militants fired at Dar while he was en route to his office. He suffered grievous wounds and was shifted to the Sher-e-Kashmir Insitute of Medical Sciences, Soura where he succumbed to injuries late Saturday evening.

A wreath-laying ceremony was held at the district police lines in Srinagar on Saturday. Inspector-General of Police, Kashmir, Vijay Kumar, DIG central Kashmir range, SSP Srinagar, SSP (Police control room), and other officials paid tributes to the departed soul. He was later laid to rest at Danwar, Eidgah in the old city.

Locals said Dar was a driver before joining the police force. “He was first appointed as SPO. He wanted to give the best life to his family. He worked very hard. Talk to anyone in our locality, they will vouch for his character and affability,” said his relative.

Cries and shrieks rent the air as the news of Dar’s death reached his home. His family sang a heart-wrenching elegy as people carried his body to his last resting place.

“For the last few years, he was busy constructing the house. He had borrowed a loan. He wanted to shift soon to his new house. But tragically he was killed. He used to drop his daughter at school every day. On Saturday, she did not go. We fear that assassins were chasing him from his home,” she said as her eyes welled up with tears.