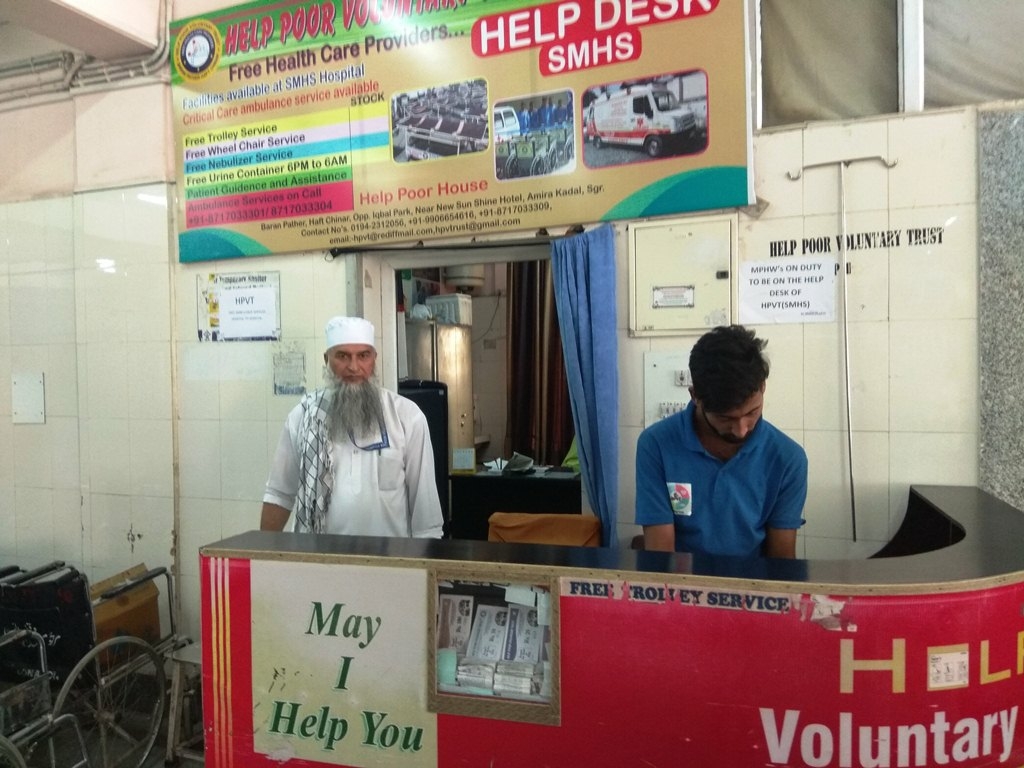 Srinagar:  Inside a small room at the casualty block of Shri Maharaja Hari Singh (SMHS) Hospital, 56-year-old Mohammad Ali Lone is giving important tips to his volunteers about patient care.

From ferrying stranded patients home to providing lifesaving drugs on discounted rates, Lone is marshalling his men to extend helping hand to poor, needy and the people in distress.

Lone’s Help Poor Voluntary Trust (HPVT) has been in the thick of things since the Kashmir lockdown began after Article 370 was scrapped and J&K was divided into two union territories on August 5.

“Before this situation unfolded, we used to get 20 to 25 calls for ambulances every day. After telecommunication services were suspended, we are receiving five to six cases daily. People now walk into our office for availing ambulance services,” said Lone.

A reputed agricultural scientist, who volunteers as social activist after his office hours, Lone is running free 24×7 ambulance services in six hospitals of Srinagar. With a fleet of 11 ambulances and 100 volunteers, Lone’s HPVT is proving to be a lifeline for the poor and ailing in the valley.

“We have been constantly on our toes. Let me cite an example. Earlier this month on the day of Eid, a local SHO informed me that there are two bodies lying in the hospital. I rushed to my office and arranged for their transport. One of the bodies was dispatched in a Tata Sumo cab. Another body was ferried in our ambulance to remote Kalaroos,” he said.

For the last almost four weeks days, Kashmir has been under strict lockdown. Reaching hospitals in an emergency situation has been the biggest challenge for the people given the strict restrictions. And for those people whose loved ones passed away in the hospitals, ferrying their bodies has been nothing short of an ordeal.

“We have ferried more than 41 bodies in our ambulances. Some of these bodies were sent to far-flung areas of the state. One of the bodies was sent to Kishtwar and another to Doda. The dead deserve respect,” said Lone.

Hundreds of patients and their attendants availed the free ambulances services of HPVT for the last 15 days. A large number of seriously ill patients were brought to hospitals from their homes as there was no transport facility available.

Free ambulance service is just the tip of the iceberg.  HPVT has been at the forefront of providing lifesaving drugs to poor patients at discounted rates.

“We charged Rs 1,925 to an accident victim against the medicine bill of Rs 3,825. Similarly a brick-kiln labourer from Lucknow, who suffered burn injuries at his workplace, was given 50 per cent discount on his medicine bills,” he said.

Even some poor patients, who do not have the means to pay for the treatment, are provided free medicines by the trust. For the HPVT volunteers, it is ‘humanity first’ that keeps them going in tough times.