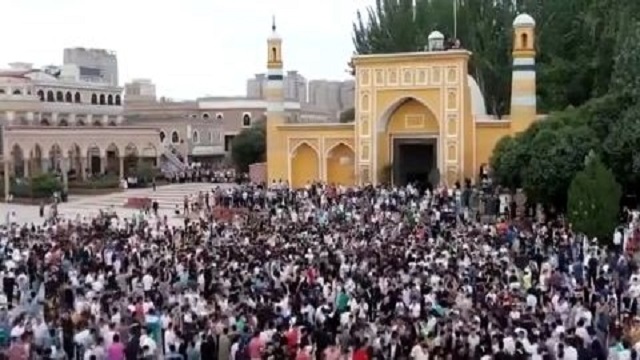 Washington: The authorities in Xinjiang sent local cadres to celebrate an Islamic holiday with Uyghurs in China’s far-western region amid ongoing repression of the predominantly Muslim minority group, in what Uyghur rights leaders said was a further effort to cover up the real situation there, RFA reported.

Known as the Feast of Sacrifice, Eid al-Adha (Qurban Eid) is a major Islamic holiday that marks the end of the Hajj pilgrimage to Mecca in Saudi Arabia.

China’s state media reported about work teams of local cadres who “visited” Uyghurs with gifts of food and helped them work in their fields in celebration of the holiday.

The state media also released a video of Uyghurs dancing in what some observers said were staged performances, RFA reported.

A report on Tengritagh (Tianshan), the official website of the XUAR government, told how visitors spent the holiday celebrating with Uyghurs and delivering gifts of rice, noodles, cooking oil, and milk.

China’s attempts to deceive the international community by portraying happy Uyghurs’ as part of its propaganda are becoming “evermore naked”, said Ilshat Hassan Kokbore, a political analyst based in the US, who’s also the vice-chairman of the executive committee of the World Uyghur Congress, RFA reported.

“It’s clear from its latest propaganda blitz featuring Uyghurs happily’ celebrating the Qurban Eid under the watch of fang huiju officials,” he said, referring to the cadres dispatched by the regional government to monitor Uyghurs in their homes and report their activities to the authorities.

“Their job is to surveil, manipulate and even threaten the Uyghurs by forcing them to smile, look happy and perform for the state media to deceive the world,” Kokbore told RFA, adding, “In fact, this is an intensive form of state repression that we’re witnessing. This inhuman treatment of Uyghurs is more than shocking, but pure evil.”

Rushan Abbas, executive director of the US-based Campaign for Uyghurs, said that “China’s manipulation and orchestration of Uyghur happiness during the Eid” would not fool anyone.

“The international community is fully aware that China has been committing an ongoing genocide against the Uyghur people and rooting out Uyghur people’s belief in Islam for the past six years,” she told RFA.

“No amount of Chinese propaganda and manufactured happiness of Uyghurs will change the fact that China is actively destroying the very foundation of Uyghur people’s religious beliefs and practices,” she added.