How children are battling deadly cancer in Kashmir 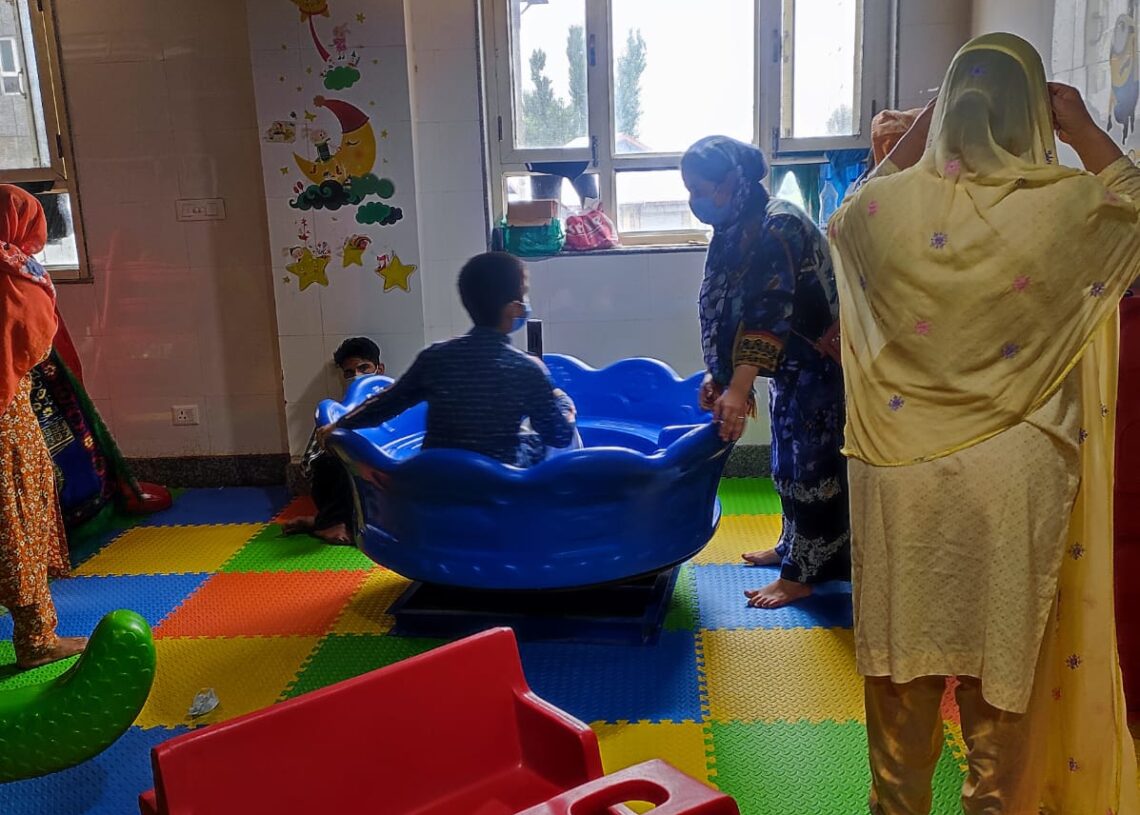 Srinagar: When the silver screen back in the ’60s came alive with the song: “lakdi ki kathi, kathi pe goda”, it had overtones of innocence. Years later in a grim pediatric oncology ward at SKIMS, Soura far from the tinsel town, the song resonant with irony and pathos. With a cannula inserted in his tiny frail hand,  six-year-old cancer patient, Zaid Wani keenly listens to the rhyme on his mother’s phone. The song that has captured the essence of a fun and frolic childhood for generations seems a dream too far for him.

Little Zaid is in the ward, waiting for his seventh dose of chemotherapy. His haggard face lights up with a weak smile as the nurse brings him a bunch of heart-shaped balloons. “There is no need to fear, you will be fine soon,” she assures him.

Hailing from Sopore, Uzair was diagnosed with cancer in 2019. He developed a searing pain in the stomach followed by a high-grade fever.

“He was three-year-old then. The ultrasonography report showed a neuroblastomic tumor. (The term neuro refers to nerves, while blastoma refers to cancer that starts in immature or developing cells). Since then, his disease has relapsed thrice and he has had seven cycles of chemos,” Zahoor Ahmad Wani, his father said.

Zahoor has spent around eight lakh rupees on his treatment so far. “I worked in a private company. Given his frequent visits to the hospital, I had to quit the job. I exhausted all my savings and sold land to meet the medical expenses. He is admitted here for the last fifteen days. I, along with my wife, have to be around him all the time. Currently, my other two children are being taken care of by their elder uncle,” he said.

He said his only hope for his son now lies in the stem cell transplant.  “However, it’s a costly treatment. I cannot afford it. I hope the sum can be arranged so that he becomes disease-free as soon as possible. For now, the doctors are doing their best to help him fight the disease,” Zahoor said.

Adjacent to his bed, fifteen-year-old Bilal has been fighting the deadly disease since 2013. Once a cricket buff with a sturdy body, now looks feeble with chemo cycles leaving him devoid of hair.

He repeatedly developed fever and weakness. The test reports showed Acute lymphoblastic leukemia (ALL). It is a type of cancer of the blood and bone marrow that affects white blood cells.

“I loved to play sports. However, cancer rendered me weak. I want to get better and play again,” he said.

Cancer is one of the most traumatic health concerns in Kashmir and if diagnosed in children it becomes more disturbing and distressing.

Figures show that around 5 to 6 percent of cancer patients in Kashmir are children, among whom leukemia is the most common. The word ‘leukemia’ literally means white blood, just like the disease where abnormal white blood is produced creating problems while compromising the overall health.

“Yet, in Kashmir, many factors result in late detection majorly due to lack of awareness. Apart from this, many myths have created turmoil in people’s minds about childhood cancer. First and foremost, cancer is not the end of the world.  Children with cancer can lead a normal childhood. Many children return to normal school life after treatment. In other cases, children and their families modify their lifestyle to achieve normalcy,” he said.

He emphasized that the second myth is that childhood cancer is a death sentence. “The fact is that most childhood cancers are curable. For example, in acute lymphoblastic leukemia which is a common form of leukemia, 3 in 4 children can be cured by chemotherapy alone. A successful cure depends on being detected on time and receiving the proper treatment,” Dr. Faisal said.

The doctor stressed that continuing follow-up care, however, remains important for survivors. “A lot of patients don’t follow up thinking they are disease-free. They are at higher risk for secondary cancers or chronic health conditions related to their initial cancer treatment. Therefore, vigilance and regular monitoring are important for early identification and treatment of any health challenge for impairment.”

Besides having a playroom for young patients, the pediatric oncology department distributes free food packets and snacks to the patients helping in fundraising for underprivileged patients.

“In collaboration with the cuddles foundation, our dieticians offer food packets to all patients and their families. It includes nuts, rice, milkshakes, etc. Besides, many families cannot afford treatment costs, our social workers help in generating funds for poor patients. We ensure that more children survive childhood cancer and thrive as adults through early diagnosis, and a holistic approach to supporting survivors and their families, who are dealing with the long-term effects,” a staffer at the ward said.