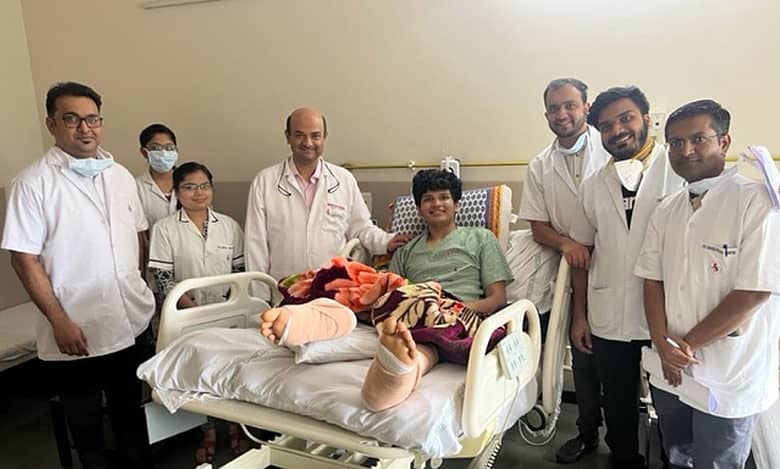 New Delhi: Apple Watch has once again saved a life, this time of 17-year-old Smit Metha who hails from Maharashtra’s Raigad and studies in Pune.

In July this year, Metha, who is a NEET aspirant, went on a trek with three friends to Visapur Fort in Maharashtra.

“It was raining heavily. The initial trek around went well but on the way back, I slipped and fell into a deep valley owing to a muddy track. I fell nearly 130-150 feet down into the valley. Deep in the forest, both my ankles were dislocated. I didn’t have my phone on me but I was wearing an Apple Watch with cellular functionality,” Metha told IANS.

Due to the thick vegetation on the hillside, his friends couldn’t spot him.

Luckily, he was wearing an Apple Watch Series 7 and was able to make a call to his parents, informing them of the accident and his exact location and then calling his friends to also tell them about his location so they could call for help and bring paramedics.

Narrating the unfortunate incident, he said that he called his parents via Apple Watch and asked them for help, and also called friends and directed them to his location.

“I was screaming in pain. Two trekkers helped me by cutting nearby plants and also called rescue services. I was transferred to an orthopedic hospital in Pune,” said Metha.

He was discharged on August 7 and later took further treatment from another doctor in Malad.

“I was on bed rest till October 13. Now, I can walk with the help of a walker and a stick. The Apple Watch saved my life,” Metha told IANS.

“It sounds like a terrible accident. Thanks so much for sharing your story with us. I wish you a full and speedy recovery,” Cook wrote.

In March this year, Apple Watch saved a dentist from Yamunanagar in Haryana who bought the wearable device as a birthday gift for his wife.

Dr. Nitesh Chopra, 33, bought Apple Watch Series 6 on his wife’s birthday. When he checked his electrocardiogram (ECG) on the Watch, it twice showed arrhythmia signals or irregular heartbeats.

Feeling uneasy, he got himself checked at a nearby hospital. An angiography report later showed massive blockage following which doctors recommended stent implantation.

In 2019, the ECG feature on Apple Watch saved the life of a 61-year-old man from Indore.

R. Rajhans, a retired pharma professional who uses an Apple Watch Series 5, checked his ECG on the watch after he felt unwell in March.

When the irregular heartbeat signals persisted, Rajhans decided to approach a doctor. Rajhans was diagnosed with a low ejection fraction and required immediate heart surgery.

He underwent a Mitral Valve replacement surgery and it was his Apple Watch that helped detect the irregular heart rhythm before the Valve failure Echo-cardiograph.

In 2018, Pune-based lawyer Arati Jooglekar thanked Cook for a “life-changing” moment when her Apple Watch kept buzzing her to take a deep breath and relieve the stress as her heart rate had shot up to 136 beats per minute.