Horror caught on cam: Man pushes wife in front of running train, runs away with kids, says she was ‘having an affair’ 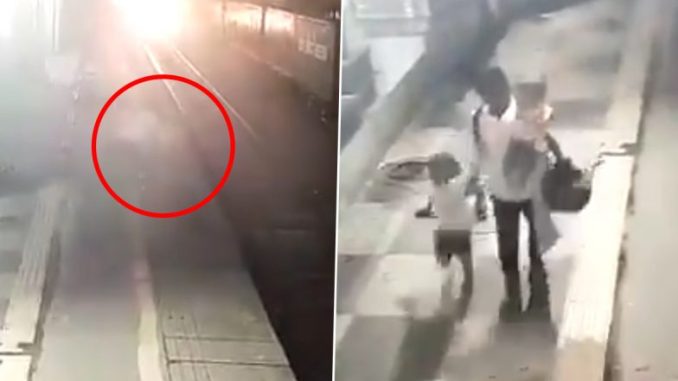 A man pushed his wife in front of a running train in Mumbai’s Vasai area and then ran away with his children. The shocking incident was captured in the nearby CCTV camera which helped the police track and arrest the accused man within 12 hours of him committing the crime

The man was arrested by the Government Railway Police (GRP) in Bhiwandi. He has been booked under IPC section 302 (murder).

According to the GRP, the motive behind the murder was the husband’s doubt on the character of his wife. The accused said that he had proofs related to it which made him do the horrifying act of pushing her infront of the running train.

“The two children (one 2.5 years and the other 5 years) who are left without their parents have been sent to the children’s welfare home and the relatives are being contacted,“ said DCP-Western zone, Sandeep Bhajibhakre.

According to the GRP, around 4.10 am on Monday morning, the accused woke up his wife who was sleeping on Vasai railway station, platform number 5, along with two children. As soon as he saw an incoming train, he pushed her infront of it.

“As soon as we got the CCTV footage of the man pushing his wife, we started hunting for the accused. We deployed six teams who worked non-stop to track the accused. We followed him to all the locations where he went after the incident and finally nabbed him inside his home in Bhiwandi,” added the DCP.

According to the GRP, the accused was having fights with his wife over 3-4 months, doubting her character. “The reason why the family was at Vasai railway station that day is still under investigation, however the according to the accused, the wife was trying to leave the house,” added the GRP.

The accused will be taken to court on Wednesday, said the police.