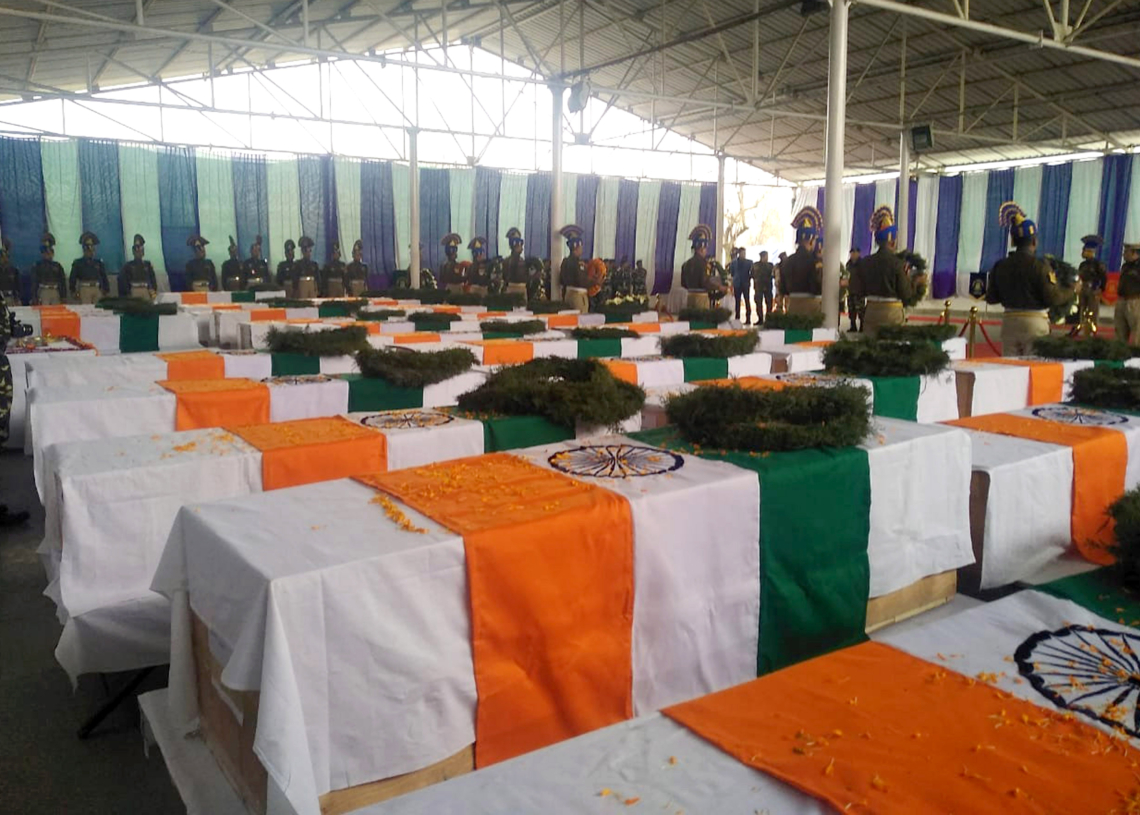 Srinagar, Feb 15: Five more personnel of the paramilitary CRPF succumbed to their injuries late Thursday evening and early Friday morning taking the number of those dead in Thursday’s suicide attack on Kashmir highway to 49.
On Thursday afternoon at about quarter past three, a massive suicide bombing took place on the highway near Lethpora in Awantipora town of Pulwama district, about 20 kilometres away from the city-centre here.
A local Jaish militant rammed a vehicle loaded with explosives into a convoy of CRPF vehicles coming from Jammu, ripping apart one of the buses, which had 44 personnel aboard, while causing substantial damage to at least two other buses.
Quoting an official of the CRPF, local news agency Global News Service confirmed that five more critically wounded soldiers succumbed to injuries in the army hospital Thursday evening and Friday morning taking the death-toll of the slain troopers to 49.
“While a total of 44 CRPF men belonging to different battalions were travelling in one vehicle, 39 others were travelling in another,” the CRPF official said.
He added that the CRPF men belonged to 3rd, 17th, 21st, 45th, 54th, 61st, 76th, 82nd, 92nd, 98th, 118th and 176th battalions.
“None from the bus carrying 44 CRPF men survived. Five of the injured among those travelling in another bus succumbed, one of them yesterday (Thursday),” he said.
Militant outfit Jaish-e-Mohammad in a statement on Thursday had said that their militant, Adil Ahmad Dar alias Waqas Commando, a resident of Pulwama, was the attacker who drove the vehicle (an SUV) and carried out the suicide attack.
The bus which bore the major brunt was part of a convoy of 78 vehicles carrying over 2,500 troopers of the paramilitary force.
On Friday, a wreath-laying ceremony was held at Humhama here and was attended by Home Minister Rajnath Singh and other officials of the Union Ministry and state government.
Quoting official sources, news agency GNS said that bodies of 40 of the slain were identified while body parts of nine others were collected and would be sent to their native villages after confirmation.
“Nine of the slain CRPF men, the agency reported, are beyond identification and now DNA test would be conducted to identify their body parts.
“The nine personnel are known but their body parts are not differentiable and now DNA tests are being done,” the news agency reported, adding, “the samples have been taken and would be matched with their relatives.”
CRPF spokesperson Ashish Kumar Jha, the news agency reported, said that bodies of forty personnel have been sent to their respective villages for the last rites.
Asked about the DNA sampling and missing personnel, the spokesman, as per GNS, refused to comment and dropped the phone.
On Friday, a team of NIA visited the scene of the attack and thoroughly searched the area and collected samples for forensic investigations. “The nature of explosive used and quantity used would be revealed during investigations,” reports said. (With inputs from GNS)