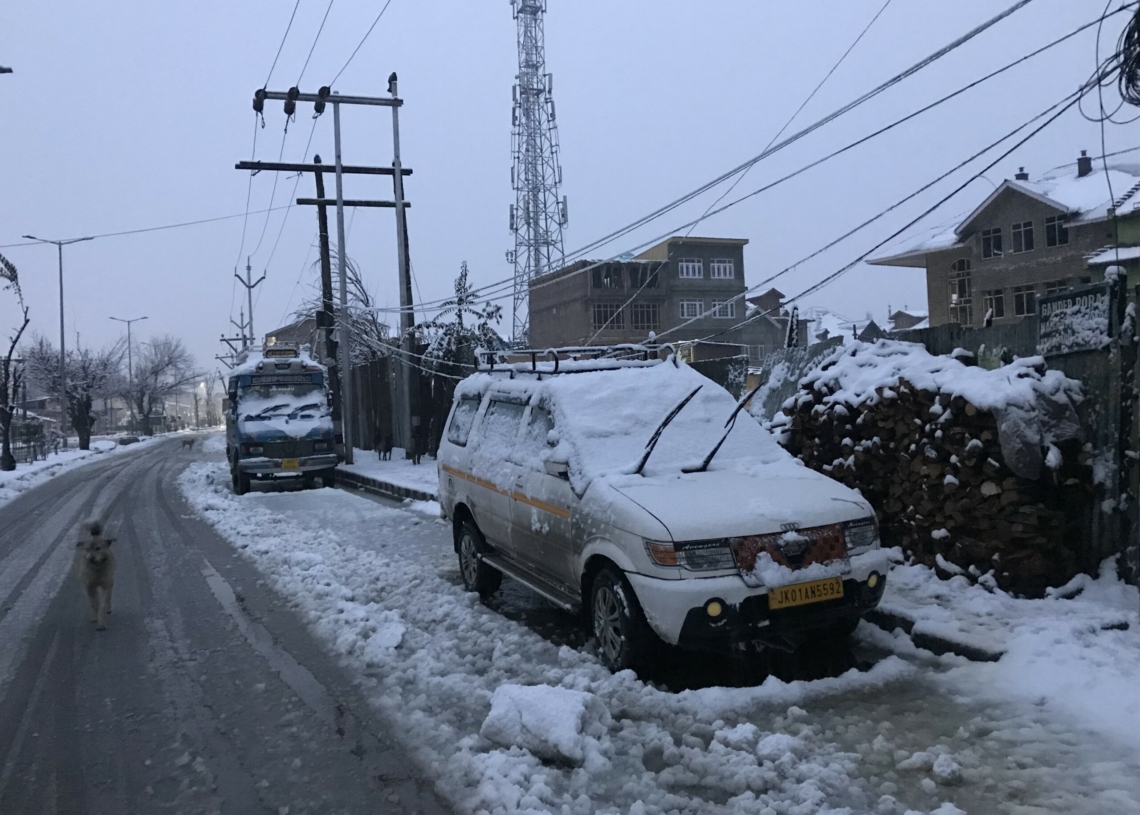 Srinagar, Jan 7: Kashmir has been draped white after fresh snowfall across the Valley.
While few inches of snow has accumulated in Srinagar as snow continued through the night there are reports of heavy and very heavy accumulation in hilly areas of North and South Kashmir.

In some areas there are reports of power outages as well because of heavy snow.
Air traffic is also expected to remain heavily affected because of the stormy weather conditions.
Light to moderate snowfall started in many parts of Kashmir on Friday evening.

Issuing a red alert, the Meteorological department forecasted heavy to very heavy rain and snow in the next 48 hours.

“Expect further increase in rain/snow intensity as the day progresses with the main intensity of heavy to very heavy rain/snow during January 7 night and January 8. There would be a gradual improvement from January 9 morning onwards in J&K,” MeT said.

There are four types of color codes signifying the level of caution: green which means no action, yellow—the situation to be watched, amber –government agencies need to be prepared for severe weather and red –action needed by the agencies.

MeT said the weather system may affect surface and air transportation, mainly on Saturday. “It may cause avalanche/landslide in vulnerable spots.”

MeT has urged people not to venture into avalanche-prone areas, follow traffic advisory seriously as well as maintain proper ventilation of their rooms.

Kashmir Weather, a private forecasting agency, said on and off rain/snow showers are expected to continue across Jammu and Kashmir till Saturday night.

“Maximum intensity of this weather system will be in Jammu region where moderate to very heavy rain/snow can occur. A few places in the upper reaches of Ramban and Doda districts can receive more than 4 feet of snow. Snowfall is also expected in Bhaderwah, Banihal, Kishtwar, Poonch, and other parts,” it said.

Kashmir Weather said maximum intensity will be in the south of the valley.. “In Shopian, snow depth can range from 10 inches to 2 feet. In Kulgam district snow depth can vary between 6 inches and 1.5 feet. The upper reaches of Kulgam and Shopian can get up to 4 feet of snow. In other parts (plains) snow depth can vary between 1 inch and 7 inches. No heavy snow forecast for Srinagar, Pulwama, Budgam, Kupwara, Baramulla, Bandipora, and Ganderbal. However upper reaches of these districts can get a good snowfall,” it said.