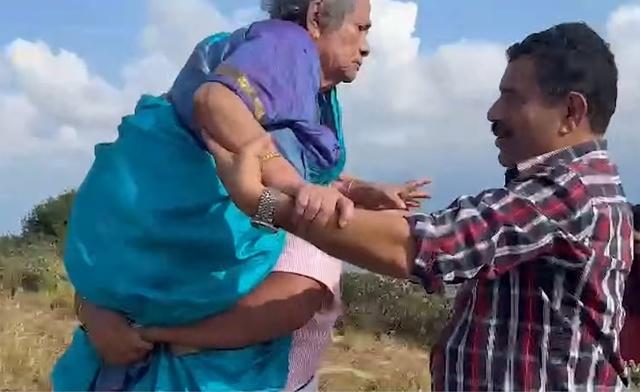 Call them modern-day Sharvans, two brothers carried an elderly mother on their shoulders and climbed uphill to fulfill her wish to see Neelakurinji, a rare flower in the Western Ghats that blooms only once in 12 years.

Rojan and Sathyan from Kerala traveled nearly 100 kilometers on a jeep with their mother, Elikutty Paul. After that, they carried her uphill to fulfill her dream of seeing a mesmerizing valley covered in Neelakurinji flowers.

Media reports said Elikutty Paul, a resident of Muttuchira in the Kottayam District, who suffers from age-related ailments told one of her sons that she wanted to see the rare flowers that had bloomed in the neighboring district of Idukki.

Reports said her sons decided to travel close to 100 km to reach Kallipara hills near Munnar. When they reached there, they realized that they can’t use the motor to reach the top of the hill further. Hence, they made this beautiful gesture for their old mother by carrying her on their shoulders and trekking for around 1.5kms to the hilltop, which has now turned into a blanket of purple with Neelakurinji flowers.