Haj rituals at click of button: Saudi releases e-manuals for pilgrims in 14 languages 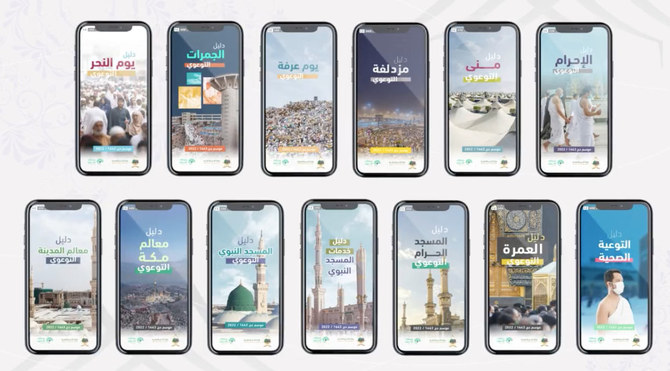 A ministry video shared on Twitter explains various features of the e-manuals and how they function.

“These guiding e-manuals are interactive, and include Shariah and Islamic law, procedural, organizational and health directives which pilgrims will need during their Hajj journey,” the ministry said.

“All you have to do is visit the guide website, pick the language, browse the guide you need, then you can listen or watch the available materials and download it as well.”

The video collected hundreds of thousands of views, with several officials commenting on the initiative.

Minister of Hajj and Umrah Tawfiq Al-Rabiah shared the video on his official Twitter account and wrote: “For a perfect Hajj journey, here are Hajj guides.”

In a TV interview, Hisham Saeed, assistant undersecretary of the Ministry of Hajj and Umrah for Hajj and Umrah Services, said that the guides’ detailed explanatory infographics and images will give pilgrims an alternative to audio or written materials.

Each catalog is supported by text, images, and illustrations, in addition to a set of educational videos and audio materials.

Topics include Hajj rituals, as well as Ihram, Mina, Muzdalifah, Arafat Day, Jamarat, Umrah, health awareness, the Grand Mosque, the Prophet’s Mosque, and its services, and city landmarks of Makkah and Madinah.

The guides are compatible with all phone operating systems, IOS and Android, and can be reached by visiting guide.haj.gov.sa

The Ministry of Hajj and Umrah seeks to serve pilgrims in a way that enables them to perform their Hajj rituals in the most ideal way possible. The ministry aims to facilitate the journey of pilgrims and enrich their spiritual and Hajj experiences.