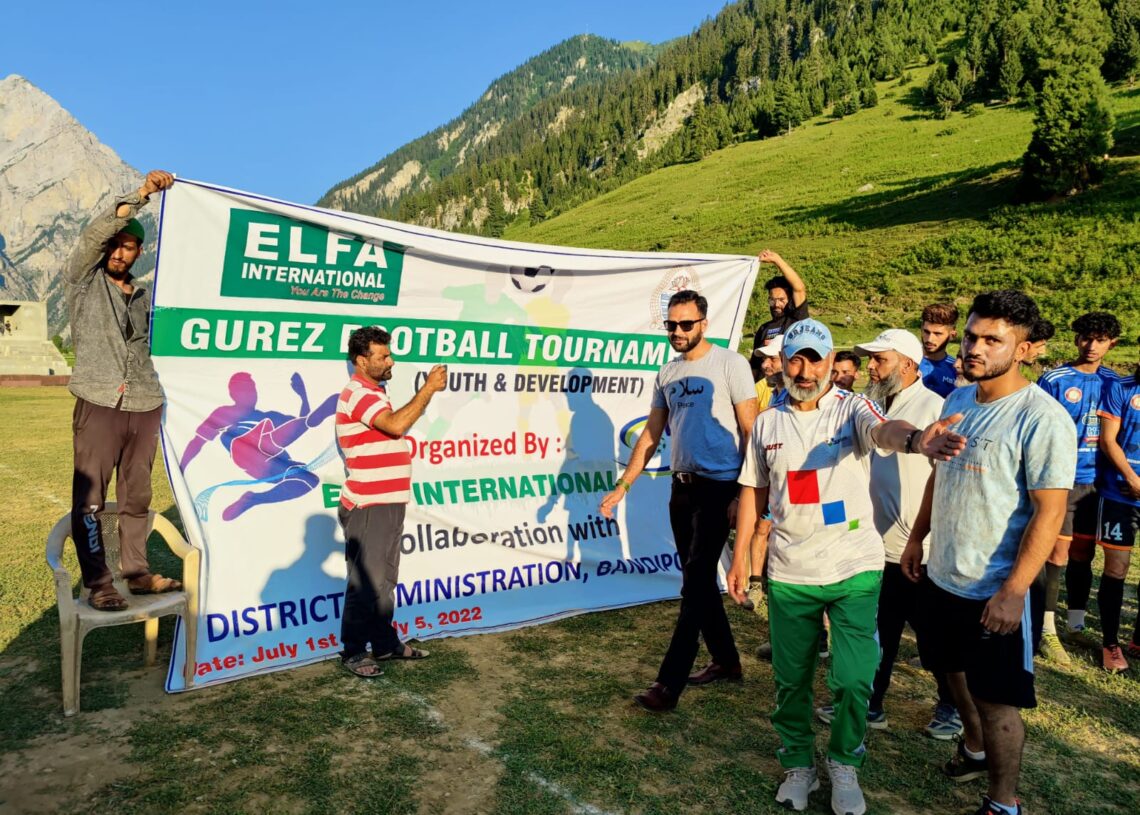 Gurez: The Mega maiden Football tournament concluded in Gurez with SFA Football club emerging  as winners. This event was the first of its kind, at Gurez which received huge acclaim and participation.

The event was organised by the District Administration, Bandipora in collaboration with ELFA International under the guidance of DR. Owais Ahmad District Development commissioner Bandipora and overall supervision of Mohammad Ashraf Hakak , ADDC Bandipora.

Among others present at the Finals  were Mr. Mohamad Ashraf Hakak ADDC Bandipora,   DR. Mudasir, SDM Gurez, Mr. Bashir Ahmad SDPO Gurez.  The final match ended up in a round of penalties and SFA Football club emerged as winners, Sports Club Bandipora Dawar football came up as the runner up and Dawar Football club as the 2nd Runner up.  Zakir Hussain Dar was awarded Man of the tournament

The event which was kick started by  SDM Gurez Dr. Mudasir on 1st of July 2022, concluded here on 5th of July 2022.  The event was attended by a huge crowd who had gathered from Gurez and adjacent areas. The event not only provided a rear occasion to the players to show their talent and sportsmanship, but provided the spectators with a climax of entertainment and show. The people appreciated the efforts of district administration and ELFA International for making the event possible and also asked the ELFA International to continue such events in future too. The people also hailed the ELFA International for its tireless efforts in the field of humanitarian sector and requested the organisation to extend its educational and healthcare programs in the area.

Mr.  Hakak said in his  speech that the district administration Bandipora and sub divisional administration is committed to the overall and holistic growth and development of youth. The event was also graced by SDPO Gurez, Mr Bashir Ahmad (JKPS) Expressing himself on collaborating with ELFA International, he appreciated the initiatives taken up by ELFA international in the direction of youth leadership programs, drug de-addiction via sports activities and the overall spectrum of their humanitarian and social work. He said that the administration aspires to take these events to all zones of district Bandipora and expressed his intent to collaborate with ELFA international to organise events like these in future too. The winning team was given a cash award of Rs. 50,000 and the runner-up team received a cash prize of Rs. 25,000, second Runner- Up received a cash monento of Rs. 15,000 and each participating team was presented a token of appreciation of Rs. 3000 to encourage them and  enhance their sporting activities from ELFA International. Hakak, while complimenting Elfa international appreciated ELFA International’s efforts in carrying these activities far and wide to all corners of the Union territory.He ensured the administration’s active support to events like these which not only provide positive engagement to the youth but also act as anti-drug addiction agents. Dr Mudasir Ahmad  SDM Gurez,  emphasised the role of such programs in places like Gurez which are otherwise cut off and therefore left alone from the mainstream buzz of the state and people lack the requisite exposure. He said that programs like these are pivotal in developing leadership qualities among youth and also have a positive role in acting as a deterrent against the growing menace of drug abuse. He said that these activities also have the potential to engage youth in long-term sports activities, ensuring their physical, mental and social well-being.

The event was inaugurated by Mr Mehran Khan, CEO of ELFA International, who said that the program was an extension of ELFA International’s initiative in youth leadership, sports and the Anti-Drug Abuse Campaign.    Mehran emphasised the role of sports in the overall growth and development of society and its potential to act as a deterrent against the menace of Drug Abuse. He also reiterated the need and necessity of organizing events like these in places like Gurez, which otherwise receive very little attention due to tough terrain and remote location. He said that ELFA International is committed to its cause of inclusiveness which includes organising events like these across the geographical spectrum. Mehran recounted the active support extended by ELFA international to sports activities taking place across the state. He said that the organization has been relentlessly extending logistic and mentorship support in the field of sports since its inception, in addition to renovating and reconstructing the small playgrounds. He said that ELFA International has been actively promoting sports activities by sponsoring teams across the state, providing them with sporting equipment and other logistical equipment.