‘Goal is to provide 24X7 power by 2025’: Kansal reviews performance of power sector 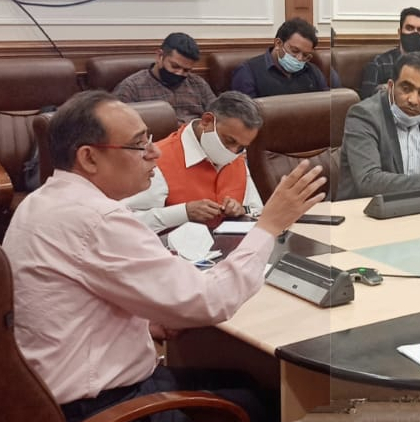 Jammu: Principal Secretary Power Development Department, Rohit Kansal Tuesday chaired a high level meeting to review the performance of power sector in Jammu and Kashmir and the preparations to be made for ensuring regular supply to the consumers during the coming summer season in Jammu division. The meeting also held deliberations on the roadmap to be made for providing regular power supply to all in J&K by 2025.

“Our collective objective should be to ensure 24×7 power supply to all the consumers of Jammu and Kashmir in the coming three years,” the Principal Secretary stated while addressing the officers of all Power Corporations.

Outlining the goal of the department to provide 24×7 power supply to entire Jammu & Kashmir by the year 2025, Rohit Kansal said adding that to achieve this, we need to have a vision plan for the coming three years. During the discussions, he stressed on system strengthening, financial stability of Corporations, resolving issues hampering the pace of projects, systematic improvements and augmentation of projects etc.

Focusing on safety and welfare of the staff, the Principal Secretary said that individual and system safety is of utmost importance and focused attentions is to be accorded to ensure that there is zero accident; zero death due to any kind of human negligence. The safety manuals should be implemented at every work place and the concerned senior officer should ensure that the field workers are using safety equipment’s while working.

The Principal Secretary observed that the Power corporations have managed well over the past financial year, despite challenges posed by Covid pandemic. He also appreciated the joint efforts for delivering power smoothly during peak winters in Kashmir.

To resolve the public grievances, the Principal Secretary asked the IT Cell to make the Call Centres fully functional along with required IT support and trained staff. Every grievance received at the Call Centre and other online platforms should be given high priority and should be disposed of by giving proper reply to the complainant. He also directed Executive Engineers to stay in touch with the public through social media. Grievances received through the Lieutenant Governor’s Grievance Cell shall also be resolved on priority, added the Principal Secretary.

He reiterated the Lieutenant Governor’s directions that the power transformers damaged would need to be replaced within 24 hours in case of urban area, and 48 hours in rural area.

With regard to execution of Power projects in the UT, the Principal Secretary directed that there should be regular inspections of all ongoing projects by the concerned officers and the pace of works should be accelerated so as to complete the same in given time frame. The projects having national importance must be completed as per the fixed timelines, these projects are being regularly monitored by the Union Ministry of Power so all these projects need to be prioritized, Rohit Kansal added.

Thorough discussions were also held on Capex Budget for the year 2021-22 and it was directed to the Chief Engineers to prepare a work plan of the proposed works in the next financial year as per their priority.

The Principal Secretary emphasized that that the department’s immediate goal is to provide regular and quality power supply during summer season in Jammu division. He directed the MD and Chief Engineer JPDCL for having action plan ready with them to deal with the any situation during the summers. Buffer stock of transformers should be made available and the same should be distributed to all the divisions in advance along with all associated material.