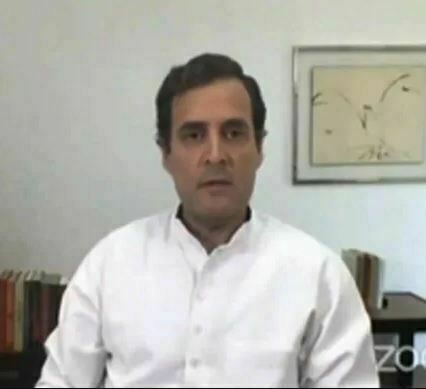 New Delhi: Congress leader Rahul Gandhi has called on the government to immediately inject a sum of Rs 7,500 directly into 50 per cent of Indian households to help ease the economic pain caused by the coronavirus lockdown.

“It’s not such a big ask,” he said on Friday at an e-press conference, responding to a question on whether the time is ripe for a national policy on migrant labour.

The Congress leader is also advocating a slew of measures to help MSMEs, including a Rs 1 lakh crore wage protection scheme and a six-month interest subsidy.

Rahul said the government needed to “give transparency” on an exit plan after the coronavirus lockdown due to end on May 17. He also said the country needed not just a “strong PM” but also “strong Chief Ministers”. The country would lose the coroanavirus fight if it was restricted only to the PM’s Office, he said.

“If we keep this fight only in PMO, we will lose; PM must devolve power,” the Congress leader said in a video interaction with the media.

Prime Minister Narendra Modi, he said, had a style of working and that “may be effective” in other circumstances. “It may work for him, but when the country is facing such an unprecedented crisis, we don’t need just one strong PM… we need many, many strong leaders, strong CMs (Chief Ministers) and strong DMs (District Magistrates). We need a strong patriotic Indian leader at the panchayat level, district level, state level… we need to tackle the problem and finish it at a local level, not at the national level,” he said.

Rahul also “advised” PM Modi to talk to Chief Ministers more often, and as a colleague, not as a boss.

On the lockdown, he said the government should be transparent about an exit plan.

“We simply cannot continue without providing support to people who are suffering because of the lockdown. A lockdown brings a psychological change. It is not an on-off switch. Currently, the people are very scared of this disease, so we are going to have to make psychological changes in the minds of the people. The government, if it wants to open up, has to turn this fear into a sense of confidence,” he added.