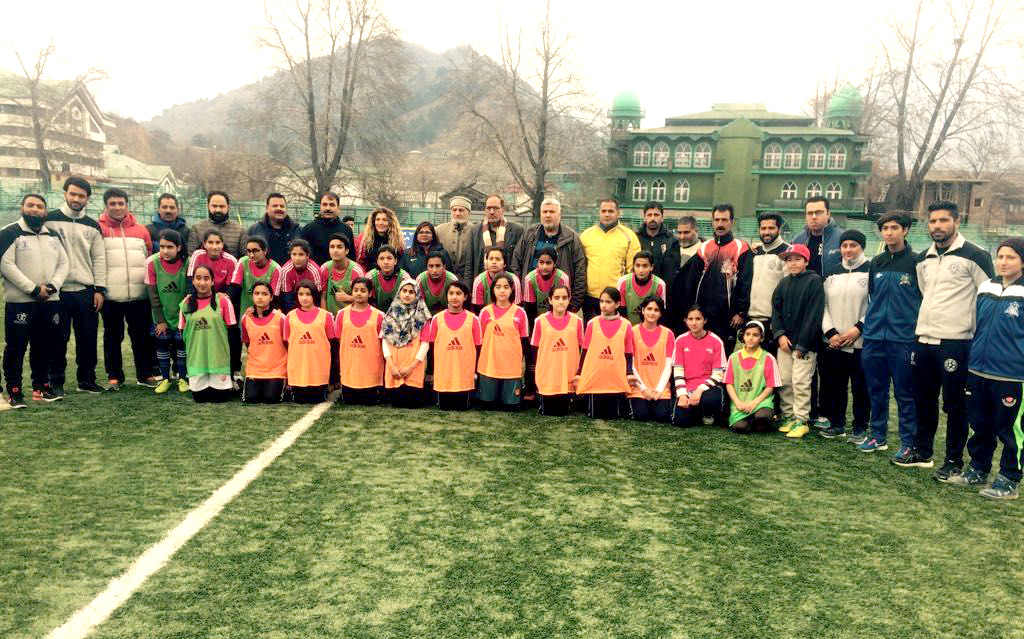 Remember girls in news here?‘A’ for Asifa or ‘A’ for Asiya or ‘A’ for Afshan? Which way would you go? Since ours is not ‘C’ for civilized but ‘C’ for conflict zone, I dare not discuss the former two and also not ‘K’ for Kishtwar or ‘K’ for Kunan either.

Till recently, for me and many others, state’s football girl would mean only Afshan– onceportrayed as poster girl of stone pelters and now the captain of state football team, whose story of astounding transformation filled newspapers for days in the past.

To me, she is inherently a sportswoman, a natural Shot Putter (‘S’ for shot and not Stone and ‘P’ for putter and not Pelter) who dared to practice one Shot Put on the road only tobecome football girl of Kashmir. Or a few would know Nadiya – the first qualified female football coach of the state who defied patriarchy in the game to win many accolades. At the age of 20, Nadiya is already a star, of whose stardom I am witness to.Historically, from J&K, one RajniKumari has been the only footballer to have represented the country around 15 years back.But now girls’ football is Kashmir is not only about Afshan and Nadiya. It has many upcoming.

This February was full of football in both Jammu and Kashmir provinces, with the former hosting the men’s Maharaja Hari Singh Gold Cup football tournament at fag end of the month. In Kashmir, watching little girls play football on the astro-turf in TRC ground on February 26 was fascinating.Closing winter made Chinars around appear shivering and snow-covered mountains in the backdrop added to the chill on the ground. It was final of the 7-a-side U-12 Girls football tournament organized by the State Football Academy (SFA) of the J&K Sports Council under the aegis of J&K Football Association. The play area, time and the goal posts were tailored to the age-group.Girls would kick the ball right and left to the best of their abilities,the game looked agriculturist though. And in the end, Mallinson School team won it 4-0 against little known International School Kashmir (ISK).

The tournament was coordinated well by Qudsiya Altaf – femalecoach of State Football Academy and supported by her colleague NadiyaNighat and other SFA staff.During the presentation, all the speakers complemented the parents for supporting their girl children to play football, the game that came bring fame to many homes in future.

TanviShafi, 6th class student from ISK was excited to be part of the school football team. Her father says, “Tanvi is a born athlete already having a Green Belt in Thang Ta (a traditional martial art of Manipur in Northeast India). She chose to play football since the school authorities selected her to represent the school team. She has the capacity to represent the country in both the games and I am quite happy with her performance”. This time, Tanviin pink jersey ended up being part of the loosing team though, yet her footballer’s journey has just begun.

Similarly, Marukh another 6th standard girl from ISK looked energetic in the field. Her mother would cheer every shot she played and at the same time appeared drowned deep in the dream of Marukh playing for the country, someday. Before leaving for home, Marukh gave a smile and innocently said, “I want to become Messi.” Perhaps, she has never watched women’s football on TV to adore someone like Carli Lloyd or Lieke Martens. At this age, Marukh may not have the skill but her eyes reflect the passion to perform. She has the attitude to play football.Marukh’s mother is equally thrilled to watch her daughter challenging male bastion on the game.

J&K Football Association has been organizing girls’ football events since 2007 to encourage participation of this gender in the most popular game on the globe. Over the period of ten years, the participation has marginally increased from 8 teams in the year 2007 to 12 teams in 2018.According to S.A. Hameed, Honorary Secretary, J&K Football Association, “Girls tournaments in the state are happening for the last 10 years, but over this period, penetration of the game within the female folk is not overwhelming. Moreover, girls’ football is encouraged in private schools only that too predominantly by the schools located in Srinagar district – most particular being the famous Mallinson School. This school has a well-defined structure for various sports activities including football, in addition to the regular academic activities. But the game of football has no takers in other districts of the valley, perhaps due to cultural issues. Furthermore, Govt. schools have not contributed anything anyway to prompt girls to enjoy the game of football.” Further, S.A. Hameed says, “If the state women football team has to be competitive enough, it would require the Govt. to identify a school which would adopt all the talent across the state for training on football in addition to the regular academic work, which is a practice in all major states of the country.”

While valley girls are picking up skills in various martial arts, cricket, badminton etc., football is only at the nascent stage of development.It would take another decade to come up to the level when the state team would be in a position to pose challenge to the state teams like Manipur, Mizoram, Tamil Nadu etc.

According to Sajid Yousuf, presently Technical Director of State Football Academy who has worked as Head Coach of National Women’s football team, he would found himself uneasy for not having contributed to the development of girls’ football in his own state, despite having been Advisor for the women’s football development programme across the country. It was in this backdrop that he approached All India Football Federation for holding a girls grass-root level tournament in J&K. It was viewed that a successful run of the programme would boost other states to follow the footprints of J&K. To join hands with Sajid, came German Footballer AnjaPalusevic AFC (Asian Football Confederation) Technical Advisor and Sapna representing All India Football Federation.

Sajid is quite confident that with the support of the J&K State Sports Council and J&K Football Association, if events like this U-12 tournament happen at district levels, very soon, women’s football in the state would get transformed from recreational to competitive. Within a span of 4-5 years, the state team will be able to compete well with the mighty North-eastern teams.

AnjaPalusevicwho is part of FIFA’s Participation Project focused on the objective of increasing the number of female players to 60 million by 2026 globally in association with various confederations, says, “I look at this tournament as a funfair for young girls. The aim is to develop women’s football at the grass-root level in India and for this, the strategy to collaborate with the local schools has been adopted since schools offer safe environment for the children to participate in the game of football. Moreover, schools generally have the requisite infrastructure including the play-field which makes it quite easy to organize events like this one held on astro-turf.”

As Chief Guest, Anja was glad to see girls from this part of the world fight it out to win.Anja says, “I came to this beautiful valley in 2007 as tourist and then and there, I decided that someday I would like to contribute to this society. It was fortunately this year I got an opportunity to fulfil the promise I once made to myself. I felt that given the situation prevalent then, the girls here would not have enough avenues of recreation like dancing, aerobics etc. If football is introduced here, besides having fun, it can become a confidence builder among girls. The climatic conditions and genetic make-up here favours the game of football and if things are planned and executed well, this state can offer international women footballers in future.”

With even the most conservative countries allowing females to cheer for the game of football in the stadia, it is but natural that in future, football has to have many female takers here. The need is to embrace the game in all the schools across the state, so that girls’ football in the state does not continue to be only about Afshan’s goal!

No traces of Ram Gurun left in Kashmir