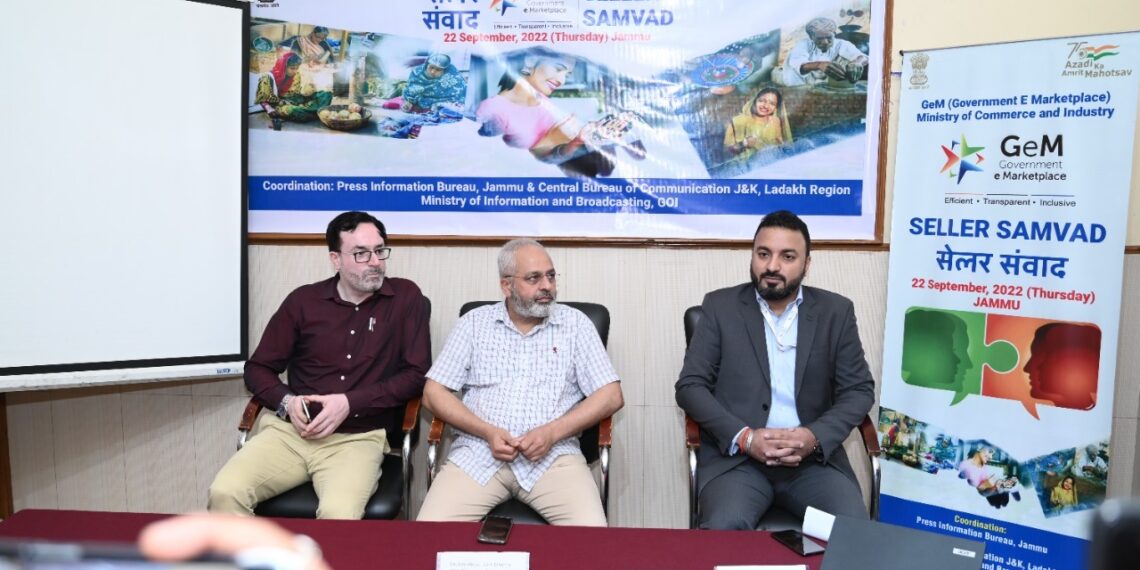 The ‘Seller Samvad’ was organized with the aim to interact with the GeM sellers, share their best experiences for learning, inspire others and make them aware of the new GeM features and functionalities that further make it conducive for them to operate on the portal.

Speaking during the occasion, Joint Director, CBC J&K, Ladakh Region, Gh. Abbas said that such face-to-face interactions between the GeM officials and sellers are the need of the hour as these interactions are helping on spot in settling sellers’ grievances and their suggestions are taken on board as well.   Abbas further said that GeM being contactless, paperless, and cashless is standing on three pillars- efficiency, transparency, and inclusivity.

Piyush Kumar, Senior Manager, States & UTs, GeM while interacting with the sellers said that GeM has achieved Gross Merchandise Value (GMV) of Rs. 1 lakh crore in the last financial year and is on the path to going beyond Rs. 1.5 lakh crore in the current financial year. He further said that GeM has now more than sixty-two thousand buyer organizations, more than fifty lakh sellers/service providers, more than ten thousand products, and 250 plus service categories. With these figures, GeM is getting bigger and more comparable to platforms like Konapss of South Korea, Chilecompera from Chile, and GeBiz from Singapore.

GeM enables the proprietors across India to attain frictionless uncollateralized working capital loans against purchase orders on GeM,   Kumar added. The app, GeM Sahay brings an end-to-end digital solution for all our proprietors, and assists them in availing loans instantly, uncollateralized, in a completely contactless and paperless manner, he informed.

Kumar further said that GeM has been awarded twice in the last financial year by CIPS under the category of ‘Best use of digital technology and by Dun and Bradstreet in the category of ‘E-Governance Solutions for Public Procurement.

Sheikh Mudasir Amin, Media & Communications Officer, PIB Jammu said that GeM has surpassed the milestone of INR 1 Lakh Crore of procurement value, in a single fiscal year in FY 21-22 which has only been possible with the support of all the stakeholders including buyers and sellers across the country.

Sarthak Khoda, Regional State Business Facilitator, GeM, J&K and Ladakh who was also present during the program said that GeM is known for redefining public procurement and has been able to bring about radical changes in the way procurement was done by Government buyers and public sector undertakings.