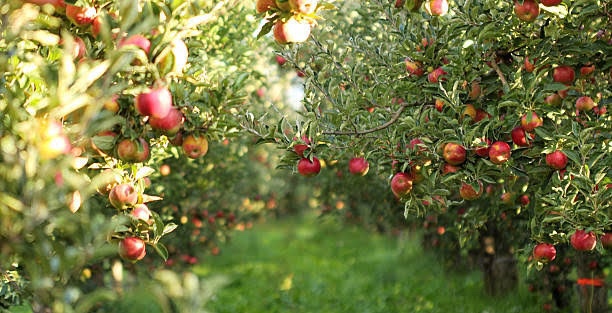 SRINAGAR, JUNE 14: Jammu and Kashmir administration is implementing a High-Density Plantation scheme with a multi-pronged strategy to make UT a leading horticulture hub in the country.

“The high-density plantations are expected to make horticulture profitable through superior yields, higher yields per hectare, early harvest, and introduction of insect and pest-resistant varieties thereby saving the expenditure on disease and pest control”.

In a bid to boost horticulture in Kashmir valley, the administration is bringing in new scientific techniques and methods for the farmers to help them produce world-class fruits. High-density apple orchards are the latest buzz among the apple growers with many farmers growing various high-density apple varieties in recent years. The popular varieties included Gala Red, Schinco Red, Jeromnie, Red Chief, Red Velox, and Scarlet which have mostly been imported from Italy.

The UT administration is motivating more growers to take up the high-density plantation. The government is also encouraged many private players to help fruit growers to set up such orchards across Kashmir.

Various steps are afoot for ensuring that horticulture and related activities get a fillip by way of various government schemes and interventions so that the quantum of produce gets increased contributing to the economy of Jammu and Kashmir. The Horticulture department ensures that the high-density plantation scheme meant to boost apple and other approved fruits production is implemented in a manner that maximum horticulturists get its benefit. A mechanism has been formulated to make it broad-based by actively involving stakeholders and incorporating their views and suggestions as well.

In this regard, Elite clonal rootstocks have been brought from the Netherlands to achieve self-sufficiency in plant production so that dependence on imports is minimized, an official said.

“Assistance to the tune of 50 percent of the cost of planting material will be given directly to the farmers through DBT mode. The per plant cost of identified variety is fixed by a Price Determination Committee having members drawn from National Horticulture Board (NHB), Central Institute of Temperate Horticulture (CITH), Department of Horticulture, and experts from Sher-e-Kashmir University of Agricultural Sciences and Technology (SKUAST). Director Horticulture, Kashmir is Convener of the Committee,” the scheme said

The 50 percent assistance to be provided directly to the growers through DBT will be calculated based on prices fixed by the Price Determination Committee on actual costs irrespective of transaction costs between the Nursery growers and the farmers.

An online portal inclusive of the Monitoring Information System (MIS) has been put in place for the registration of both eligible nursery growers and farmers for the smooth implementation of the scheme. All the details including the demand of identified plants from farmers and availability with nursery growers are uploaded on the portal.

Lieutenant Governor, Manoj Sinha, recently expressed gratitude to Prime Minister, Narendra Modi and the Union Agriculture Minister for announcing the availability of credit for the High-Density Plantation scheme under the Agriculture Infrastructure Fund.

Spelling out the key features and support being extended to the farmers under the new intervention, LG said that this step will be a huge booster for achieving the target of 5500 Ha of High-Density Plantation and change the horticulture landscape of JK.

This will also become the launching pad for the export of our horticulture produce and will increase the income of farmers of J&K manifold besides making our farmers market leader in the domestic circuit of the sector, he added. The 50 percent capital support up to Rs 22.15 lakh is being provided by the J&K administration under the High-Density Plantation Scheme.

The government-supported high-density apples prove to be more beneficial for farmers and give returns in the first year of planting itself.

Notably, a delegation of the International Fund for Agricultural Development (IFAD) extensively toured various areas of the Valley. The team visited the Centre of Excellence Zawoora and held detailed deliberations about the fruit crops being grown there.