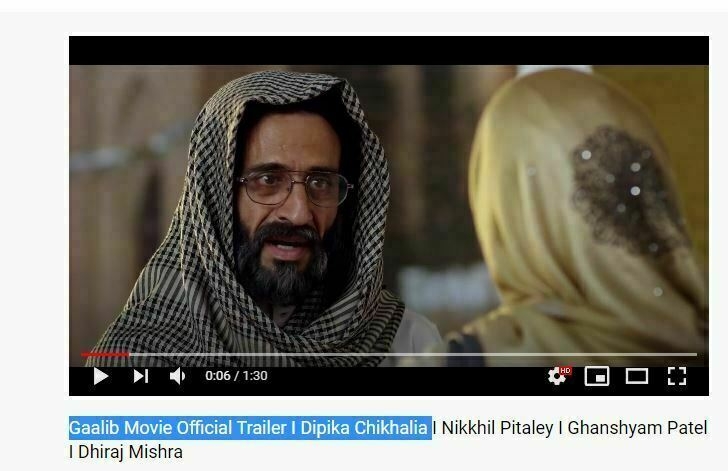 Screengrab from the trailer

Srinagar: The trailer of a Bollywood movie seemingly based on the life of slain Parliament attack convict Mohammad Afzal Guru and his son Ghalib is out on YouTube.

Named ‘Gaalib’, the movie’s trailer was uploaded on Wednesday morning. Shot in Bhaderwah also known as Chota Kashmir, the film has Dipika Chikhalia, who played the role of Sita in the famous TV series ‘Ramayan’ in the eighties, in the lead.

Though the original names of the real-life characters have been changed, the movie is believed to be based on the life of Afzal Guru. Dipika’s character name in the movie is Shabana. Nikkhil Pitaley is playing the role of Ghalib in the movie.

And by the looks of it, Mir Sarwar is playing the role of Afzal Guru as one of his dialogues and his attire in incarceration in the trailer hints: “Mujhe poora yaqeen hai ki sarkaar mujhe kabhi bhi phaansi de sakte hai.” (I’m sure that the government will hang me anytime).

In August when Dipika released its poster, she was asked by netizens not to do the movie as it would “spoil her image.”

The user was apparently commenting about her doing a movie based on the life of a Kashmiri, who was hanged after a controversial ruling.

To it Dipika replied: “I will not spoil my Image.”

Produced by Ghanshyam Patel and directed by Manoj Giri, the movie has been written by Dhiraj Mishra and Yashomati Devi. According to the Twitter profile of Dhiraj Mishra, he was initially a film journalist. Later he graduated to movie writing. According to his profile, he has written movies like ‘Jai Jawan Jai Kisaan and Chapekar Brothers’.

A few years back while shooting in Baderwah, Dipika had told media persons that she was playing the character of a militant’s wife.

“I am playing the role of militant’s wife. I have a son whose name is Ghalib. It is a general story about the sufferings of the militant’s family. Basically we fear a militant… we hate his family. They too are human beings. His wife and his child did not do any wrong,” she told media during shooting.

Afzal Guru was hanged and buried in Tihar Jail on February 9, 2013 after the then President Pranab Mukherjee rejected his mercy petition.   Guru, along with deceased SAR Geelani, Showkat Guru, and his wife Afshan Guru were charged with planning the attack on the parliament on December 13, 2001.

Supreme Court later upheld the death sentence of Afzal Guru but acquitted SAR Geelani and Afshan.  Showkat, hailing from Sopore, who was sentenced to 10 years of imprisonment, was released after completing his jail term in 2011. After the apex court verdict Guru’s wife Tabasum and son Ghalib Guru met late president APJ Abdul Kalam and sought pardon for the parliament attack convict.

Singh, who was posted in anti-hijacking wing at Srinagar Airport, was arrested along with Hizbul Mujahadeen commander Naveed Babu and Altaf when they were traveling in a car from the Shopian district of South Kashmir on January 11.  Singh was trying to drive the Hizbul commanders out of the valley.