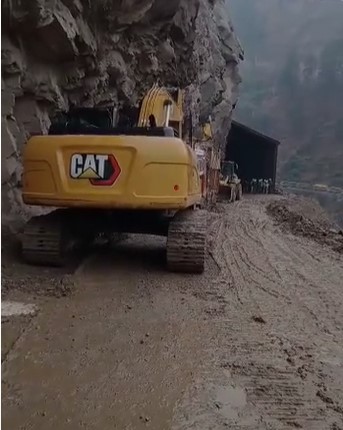 SRINAGAR: It is snowing in parts of Kashmir.

Gagangir-Sonamarg road has been closed because of the fresh snowfall. Aamir said the area recorded 7 to 8 inches of snow.

Snowfall was also reported from Marwah, Warwan, Machail, Ishtiyari, and Bhatkoot areas of Jammu and Kashmir.

The weatherman said there will be a decrease in precipitation level from today. “Expect overall improvement from January 24 to 29,” the MeT office said.

Traffic Control Room, Ramban, said Srinagar-Jammu National Highway has been closed after a mudslide at the Cafeteria crossing. “Plus a truck is stuck in Panthal area which has blocked the road. Road clearance operation is on and another update will be made at 12 o clock,” said an official.

Traffic headquarters said subject to fair weather and better road conditions, Light Motor Vehicles shall be allowed from Jammu towards Srinagar. TCU Jammu shall liaise with TCU Ramban before allowing the traffic.

Heavy Motor Vehicles and Load Carriers will be allowed shall be allowed from Jakheni (Udhampur) towards Srinagar after assessing the traffic situation on NHW.  TCU Udhampur shall liaise with TCU Ramban before releasing the HMVs.

Mughal Road, Srinagar-Sonamarg-Gumri Road, and Kishtwar-Sinthan Road have been closed for vehicular movement by the administration in view of snow accumulation.