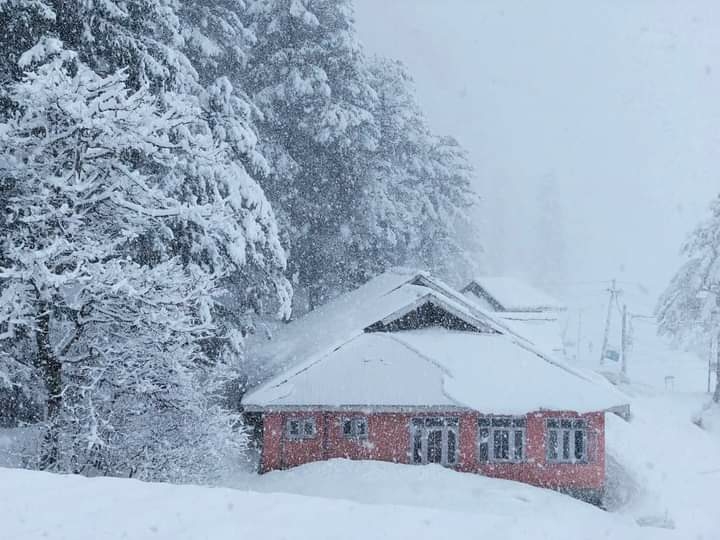 Srinagar: Gulmarg and other higher reaches of Kashmir received fresh snowfall while rains continued to lash plains amid weatherman’s prediction for “light to moderate rain and snowfall for next 36 hours.

A meteorological department official told GNS that Gulmarg, the world famous skiing resort, received 7.6 centimetres fresh snowfall in last 24 hours till 0830 hours. In past four days, the famed tourist destination in north Kashmir received 60.1cm of snow and recorded a minimum temperature of minus 3.2°C against minus 3.5°C on the previous night, the official said.

Srinagar, the official said, received 2.3mm of fresh rain during the 24 hours even as it recorded a low of 6.8°C against 4.3°C on the previous night.

The temperature was 3.5°C above normal for this time of the year in this summer capital, the official said.

Qazigund recorded a low of 5.7°C against 4.6°C on the previous night and received 4.4mm of rain during the time.

The mercury settled at 1.6°C against 0.4°C on the earlier night at Pahalgam while the famous resort received 6.6mm rain.

Kokernag, also in south Kashmir, recorded a low of 4.3°C against 2.7°C on the previous night while it received 3.2mm rain.

The minimum temperature settled at 2.6°C in Kupwara against 3.3°C on the previous night while the north Kashmir district received 12mm rain, the official said.

The weatherman has forecast erratic weather with intermittent rain with thunderstorm in plains and snow over higher reaches in the Valley till March 15.

“There is possibility of light to moderate rain and snow for next 36 hours,” the official said.

Sonam Lotus, Director Meteorological department, said that the “weather is going to remain erratic till March 15.

“Expect intermittent rain with thunderstorm and snow over higher reaches mainly during March 11-12th and 14th,” he said, adding, “Overall Improvement most likely from 16th till next spell.”

He said that the farmers are advised to avoid spraying of orchards and other farm operations till 15th March.
For March 11 and 12, the weatherman has also issued a “yellow warning” for “isolated heavy rain/snow, thundershowers with lightning, hail and gusty winds” in Kashmir as well as Jammu divisions.

There are four types colour codes signifying the level of caution: green which means no action, yellow—situation to be watched), amber –government agencies need to be prepared for severe weather and red –action needed by the agencies. (GNS)