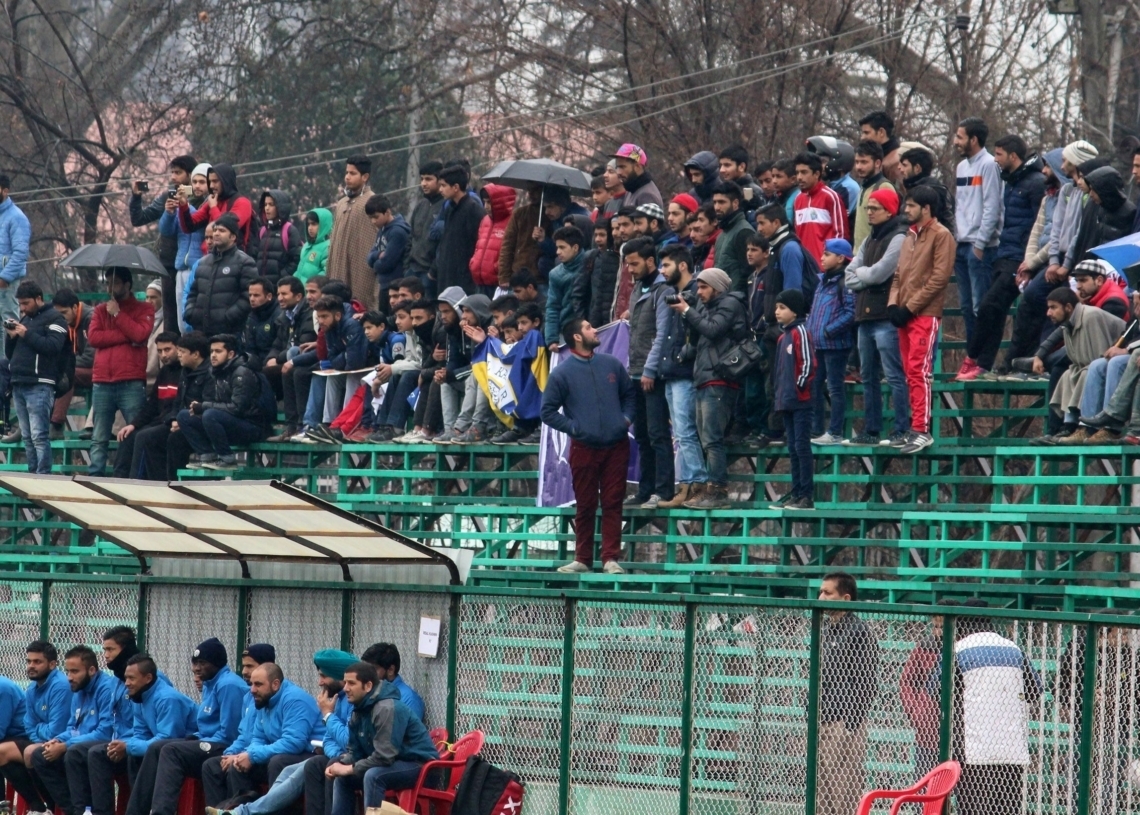 In Harry and Lucy Concluded (1825) Maria Edgeworth has written “All work and no play makes Jack a dull boy, All play and no work makes Jack a mere toy”. The sentence perhaps sets the two extremes and does not signify sports only, but to me, it means sports.

It goes without saying that football is the most popular sport in J&K. In recent times, it has received further impetus with the establishment of State Football Academies across all 22 districts of the state. Furthermore, private participation in the form of professional football clubs like Real Kashmir FC, Lone Star FC etc. has further intensified the curiosity to play this fashionable game.

Further, State Football academy has selected around 5500 (youth professional) across the state under Mission 22 of the J&K State Sports council aimed at mass participation at grass-root level. Besides this, there are around 14 I-league teams playing under different categories (U-13, U-15, U-18 and senior 2nddivision) totalling around 400 players taught and trained to compete at the national level. Thus, at present, around 20000 players under different age groups are actively associated with the game of football. This figure does not include the unregistered teams/clubs, which must be at least equal to the number of registered teams.

The professional clubs attract talented youth in the age-group of 15 to 20 years – the prime age for attaining basic education. Passionate about the game, the players tend to give up the academic education or give second preference to it, only to regret in the long run. Legendary Abdul MajeedKakroo, who did not have the chance to attain basic education says,  “Had I been well-educated, today AIFF would have been headed by Kakroo.”. Although, both his children were exceptionally talented footballers, with both having represented the state at junior level, Majeed preferred to impart education to both the children instead of making them footballers. Today, Majeed is proud to father his doctor daughter (would be) and engineer son.

It is a fact that every footballers’ parent is not like Majeed who is well aware of miseries of being a sportsman. Imagine these footballers 10-years down the line. What do they do? Perhaps, a few would have represented the country but most would have joined the mainstream, striving to make a living. And for some, a major injury would have made end-of-the-career in a split second.

For many footballers who, for one reason or the other, could not attain enough education to become eligible or even get a Government job, football remains a hope for employment for many departmental team players. It is a well-known fact that Government jobs are preferred for less accountability and illegitimate money. However, a few are lucky to get it.

In 1960s, teams like SRTC, Food and Supplies and J&K Police would invite educated football talent to join their departmental team to ultimately end up as employees of the departments. According to  AbdulMajeedKakroo, around 18 departmental teams including J&K Police, SRTC, Food & Supplies, J&K Forest, J&K Agro, Water Works Deptt, Fire Services Deptt., Posts &Telgraphs, Muncipal Corporation, Food Corporation of India, AG’s Office, Fire Services, R&B, J&K Bank etc. must have employed around 900-1000 footballers over the period from 1960 to 1989. But with the onset of militancy in 1989, the scenario changed and all the departmental teams were virtually wound up. 2000 onwards, it is only J&K Bank which has held a comprehensive employment policy for footballers. Besides, J&K Police has been engaging players on and off under different categories.

Talking on the issue, President J&K Football Association Zameer A. Thakur says, “Skill of football used to be a major reason of employment for many state players in the past. However, with the passage of time, the organizational setup, rules and regulations, financials, establishment setup etc. have changed altogether. Moreover, the thrust of the Government has shifted from being the employer to imparting skills to the youth so that they establish their own enterprises. In fact, the attitude of the present day players has witnessed a drastic shift. Today, a professional footballer of the state wants to play I-league, ISL and ultimately represent the country. He is least bothered about being employed by his owner. If good packages are given to the professional players, they would accumulate ample money during the peak of their careers, which would ultimately become the equity for their future enterprises. For this, big business houses like Tramboos, Chayas etc. which spend lakhs of rupees on advertisement of their products on national newspapers, have to come forward to adopt the football team with attractive packages. This would not only help in advertising their brands but would also help in uplifting the youth of the state”.

While there are many stories of struggle in the football arena – the most prominent being the plight of 14 talented footballers of the J&K Forest team who joined the team in 2002 on contractual basis. Out of these, 9 players have been struggling for more than 15 years to get absorbed in the department and the struggle, unfortunately, continues. Yet, a few have been wise enough to be entrepreneurial.

Zubair (name changed) who started his professional football career in 2002 with one of the most famous departmental teams of the state, is presently running a successful retail and wholesale sports good business.  Realising that waiting for the Government to issue permanent order was wastage of time, Zubair started his own venture under the name and style M/s Valley Star Sports in 2010. With the help of his father, he infused around 40% equity into the business and sourced 60% debt from J&K Bank. With a span of 7 years, the annual turnover of his firm has increased from 4 lakhs to 17 lakhs in the year 2017. Despite the floods of 2014 and the ongoing episodes of disturbance, Zubair has established himself as a major supplier of sports items to many departments, schools, colleges etc. Besides earning annual net profit of around Rs. 4 lakhs, he is satisfied to have established a business centre which he would be in a position to transfer to his progeny in future. He is no more inclined to have a Government job.

Similarly, Faisal Hameed a talented basketball player who represented the state in Senior National in 1985-86 held in Trivandrum and Jamshedpur the next year, was enterprising enough to start the most famous sports goods outlet of the valley Olympic Sports Centre in 1989 with an initial investment of Rs. 75,000/-. Son of the famous S.A. Hameed (Honorary Secretary, J&K Football Association), Faisal was introduced to the leading dealers of the country by his father who taught him the tricks of the trade. Within a span of 30 years, Faisal has grown his business multi-fold and this year, the turnover has reached around Rs. 1.50 crore. Olympic Sports Centre is an authorised supplier to J&K Sports Council, J&K Police and all major departments. On manufacturing units within the state, Faisal says, “Given skill labour and proper road connectivity which would ensure timely delivery of raw material, Kashmir valley has the potential to become the hub of Sports Goods manufacturing industry. We have the capacity to absorb all the production with the state and there is no need to source the goods from outside the state. If the Government is able to create conducive investment atmosphere by offering incentives in manufacturing, we can compete with the manufacturers of Jalandhar, Meerut and Delhi.”

To take an example from outside the state, one AshuKohli started JUST Sports in 1990 in a single room with one stitching machine purchased for Rs. 10,000/-, has established himself as the leading sports kits manufacturer of the country competing with brands like Nike, Adidas etc. Within a span of 27 years, Just Sports has become a major supplier to all Ranji Trophy teams, an authorised supplier of Sports Authority of India etc. JUST Sports not only caters to the local market, but has also reached the overseas markets supplying cricket and hockey kits to USA, UK and other countries. At present, JUST Sports employs around 70-80 workers sourcing raw material from China, Taiwan etc. Ashu is proud to say, “This country has tremendous potential to absorb everything manufactured within the country and the youth should complement the GoI initiative of ‘Make in India’. If the youth of J&K are trained in the manufacturing business, sky is the limit for their growth.”

Going by the statistics above, 20000 players means 20000 football kits to sell and that’s a big opportunity to invest in manufacturing sports goods in the state. It is for the stakeholders to design the ways and means to attain self-sufficiency in production – the market is already present. While all the 20000 would surely not become great footballers, many have the potential to float football manufacturing enterprises and become employers. Project Development, training and funding – a major hitch to start a venture, could be arranged by J&K Entrepreneurship Development Institute by designing a suitable funding scheme at concessional rate of interest. Other than that, the State Industrial Policy 2016 has lot to offer, with Sports Goods being a thrust industry. Given dedication, perseverance and thirst to grow, success would surely follow.

To sum up, I quote the most famous youth icon of the state, “I have very strong reasons to support youth taking up entrepreneurship and self-employment. It gives a man complete freedom. Government service, in turn, is freedom of stomach only. It is slavery of mind, eyes, tongue, hands and feet”.

Views expressed are author’s own. Can be reached at [email protected]

Mamata will back Singhvi to enter RS from West Bengal