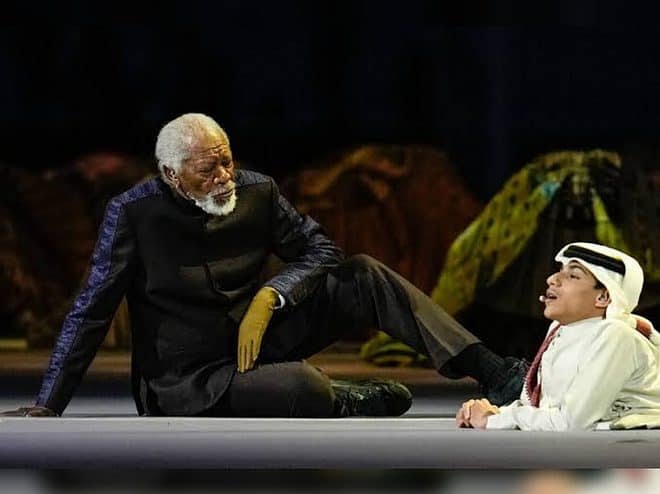 Doha: Qatari youth Ghanim Al Muftah and famous Hollywood actor Morgan Freeman have sent a message of peace and compassion from the world’s biggest sporting stage in an apparent bid to combat Islamophobia.

“O humanity! Indeed, We created you from a male and a female and made you into peoples and tribes so that you may ˹get to˺ know one another. Surely the noblest of you in the sight of Allah is the most righteous among you. Allah is truly All-Knowing, All-Aware,” reads its English translation.

Morgan said: “It seems that the world is more divergent and divided,” and continued, wondering, “How can several countries and cultures come together if each has its own way?”

Al Muftah commented, “We grew up on this land as peoples and tribes in order to unite.”

Morgan replied, “I now see that what unites us is more than what separates us… How can we perpetuate harmony more and more?” The young Qatari man replied, “With tolerance and respect, we can live together under one roof.”

The Qatari Goodwill Ambassador added that the house of poetry is the tent of the Bedouin, which was set up to be a home for all, “and when we invite you here, it will be your home, and we will gather here as one tribe,” and continued, “The land is the tent in which we all live.”

The dialogues have broken the internet. “Ghanim Al Muftah with the international star Morgan Freeman, and a wonderful scene at the World Cup party that embodies the dialogue between East and West,” said one user