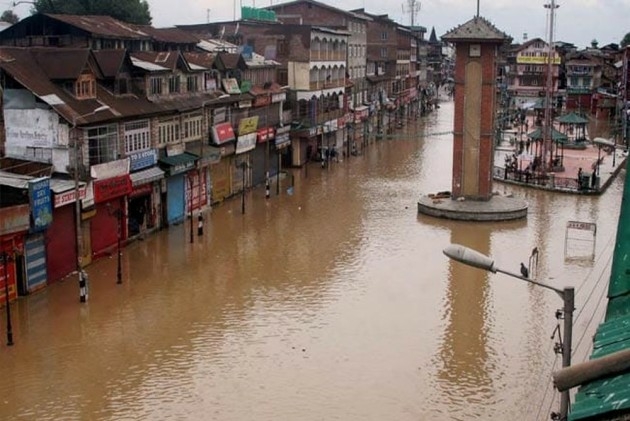 Srinagar: Five-years after devastating floods, the authorities are yet to take preventive measures to avert such disasters in future.

Official data reveals that the authorities have declared floods at least nine times since 2014.

The Union Ministry of Water Resources in December 2014 asked the state government for framing of the detailed project report (DPR) for the 80-km Dogripora channel to be constructed from Awantiporain south Kashmir to WularLake in north Kashmir’s Bandipora district.

Under this mega project, a new flood channel was to be constructed from Dogripora to Wular to carry the surplus flood discharge of Jhelum, which was expected to cost over Rs 18,000 crore.

However, the authorities have failed to frame the DPR for the project in the last five-years.

Sources in the Irrigation and Flood Control Department said that authorities on several occasions set up several committees for framing the DPR.

“These committees started work but all failed to make a comprehensive DPR. With the result the project is lingering for last so many years,” the sources said.

The authorities have now hired a team of foreign experts to study the project. “The team is expected to submit the report by next year. After that the government will decide how to prepare the DPR,” the sources added.

Post 2014 deluge, the government had announced that dredging of river Jhelum would be completed in two phases in three years. Surprisingly, the first phase still awaits completion almost five years after the announcement.

“Nothing has been done in these years, except dredging at few spots and refilling patches of Jhelum’s embankments, which were washed away in 2014 floods,” the sources said.

“The government has failed to equip the agencies that could deal with disasters and mitigate the sufferings of people in the wake of natural calamity,” an official of Revenue and Rehabilitation department, said.

Divisional Commissioner Kashmir, Baseer Ahmad Khan was unavailable for comments as he was not in his office.

However, an official at Divisional Commissioner’s office said that government has taken several measures year for prevention of floods.

“24×7 flood control rooms were set up across Kashmir in June this year. Several measures have been taken to increase the carrying capacity of water bodies. But Divisional Commissioner Kashmir can give you exact details,” the official said, wishing not to be identified.

A study titled ‘A satellite-based rapid assessment on floods in Jammu & Kashmir–September, 2014’ conducted jointly by the Department of Environment & Remote Sensing (DERS) and ISRO has warned that intensity of rainfall and frequency of rainy days in the Himalayan region may increase in 2030s, leading to another flood in Kashmir, if immediate steps are not taken to restore the drainage system of the Jhelum.