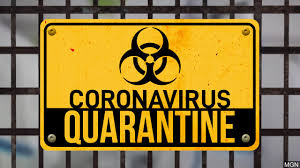 Srinagar, Mar 23: Imagine the horror of going through a menstrual cycle in the middle of a crisis situation, and ending up in a panic-stricken crowd, who has no clue of where to go.

Yes, this is how I felt when I landed in Srinagar on the cold morning of March 20. The relief of home-coming vanished in thin air when I was asked to wait in the separate section of the Airport instead of walking up to my parents, who had prayed the whole night for my safe travel.

There, I saw many fellow students from Bangladesh. The worry lines spread on their forehead gave me an inkling of the coming ordeal, but little did I know that I was about to face something more horrible.

The wait grew longer than usual. The crowd around me was unusually quiet.  They were only breaking the silence when a worried member of their family called on their phone. I too followed the suit.

It was in the afternoon when I felt some cramps and stab of pain in the back. When the pain increased, I decided to ask someone for a sip of water.

As I stood up, I tried to straighten my shirt and noticed a tiny red stain on it. This left me gasping for breath. I didn’t know where to go and whom to ask for help.

There were many male students sitting around me. Given the fact that menstruation is still a taboo here and the prevailing culturally restrictive norms, I preferred to keep mum and remain seated in my place.

Five longest hours of my life passed like this, and at 6 pm, there was an announcement.

The bus that was supposed to ferry us had arrived. I closed my eyes while climbing the vehicle, and murmuring a silent prayer. The thoughts of someone noticing my stained shirt gave me shudders.

The bus journey became another long ordeal as the place of the quarantine was yet to be decided. It stopped at many places and left us high and dry each time.

First, it was a hostel but it ran out of rooms and then a hotel which was already occupied. Another two hours were spent like this.

The screeching of wheels as it stopped and moved added to my painful cramps. I felt like moving in circles and the world blackening out before me.

The phone rang and apprehensive questions were met with affirmative answers. Everyone was at wits end and we had no consolation to offer to each other.

It was at 10 in the night when the bus halted at a local hotel. As we got off, the cold of spring night pierced my bones, posheteer as they call in local parlance.

I saw hordes of parents waiting at the gate of the hotel and their flashing torches on mobiles squinted my eyes. Amid the din, a familiar voice reached me and I could see my mother making a way in the crowd to approach me.

She quickly handed me a bag containing sanitary napkins, some medicines, soaps,  sanitizer, and a sweater.

Her parting words were, “Just be patient. Rest everything will fall in place.” (As told to Hirra Azmat)