‘Fire-fighters are real-life superheroes’: LG at passing out parade of 669 cadets of J&K Fire and Emergency Services 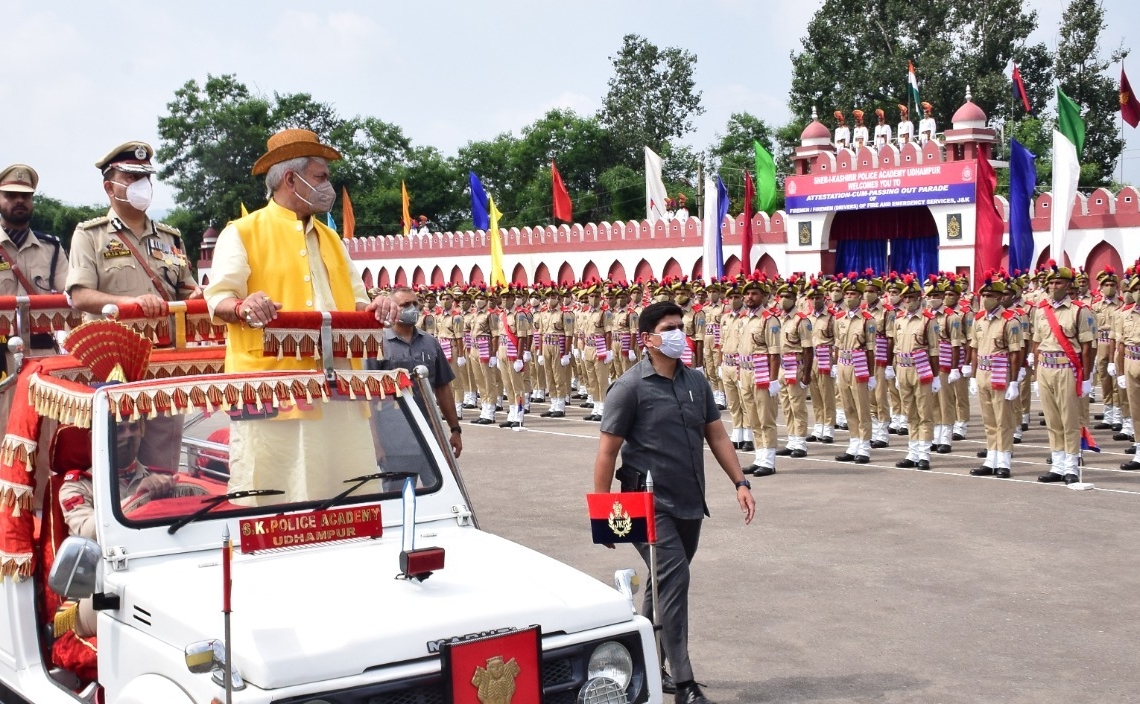 Speaking on the occasion, the Lt Governor extended his best wishes to all trainee Fire Fighters who successfully completed their training, and asked them to perform their duty with highest degree of commitment and sincerity for ensuring the safety of people. He also paid homage to the martyrs of Fire and Emergency Services department who laid down their lives in the line of duty.

“Fire Fighters place their own lives at risk in order to protect the citizens. Fire & Emergency services personnel are real-life superheroes”, the Lt Governor remarked.

Observing that there is no greater public service than saving lives, the Lt Governor exhorted the cadets to discharge the noble responsibility with utmost zeal and dedication. Carry forward the rich legacy of courage and bravery, and come out as a formidable force to deal with emergency situations, he asserted.

The Lt Governor highlighted the government’s efforts to develop the skills and expand the scale of the emergency services to meet its increasing need in continuously developing villages, towns, and cities.

We have ensured up-gradation of all facilities of Fire and Emergency Services and provision of modern fire tenders and rescue equipment, the Lt Governor said.

Continuous training of fire services personnel, and keeping them aware of the changing fire safety norms is the need of the hour. The UT government will provide every possible support to set up a dedicated Fire Academy to further enhance their capability to confront the future challenges and hazards, the Lt Governor announced.

I assure the support of the government in creating requisite infrastructure and human resources to develop our fire services personnel as the best Fire-Fighters crew of the country, the Lt Governor said.

Dedicated efforts are also being made to strengthen the human resource in the Fire Services by filling up the vacancies in a transparent manner on a fast-track basis, he added.

The Lt Governor said that the Exam and selection process for these posts commenced in 2013, but it was held up unnecessarily. The batch started in 2020 and it’s passing out parade has shown the commitment of the present UT government towards speedy disposal of recruitment process. “A transparent and efficient mechanism has been laid down in the UT for recruitments in various posts of government jobs which is entirely based on merit”, he added.

Fire Fighters are also rendering distinguished and efficient services in the internal security framework of the UT. The Police Academy at Udhampur has a long history of producing brave police personnel who are doing commendable job in ensuring a safe and secure environment for the people of J&K, and securing National Unity & Integrity through counter-insurgency operations; maintaining peace, law and order, the Lt Governor observed.

Earlier, the Lt Governor inspected the Parade, and took salute at an impressive March Past by the trainee contingents. He also felicitated the cadets who excelled during their training course, on the occasion.