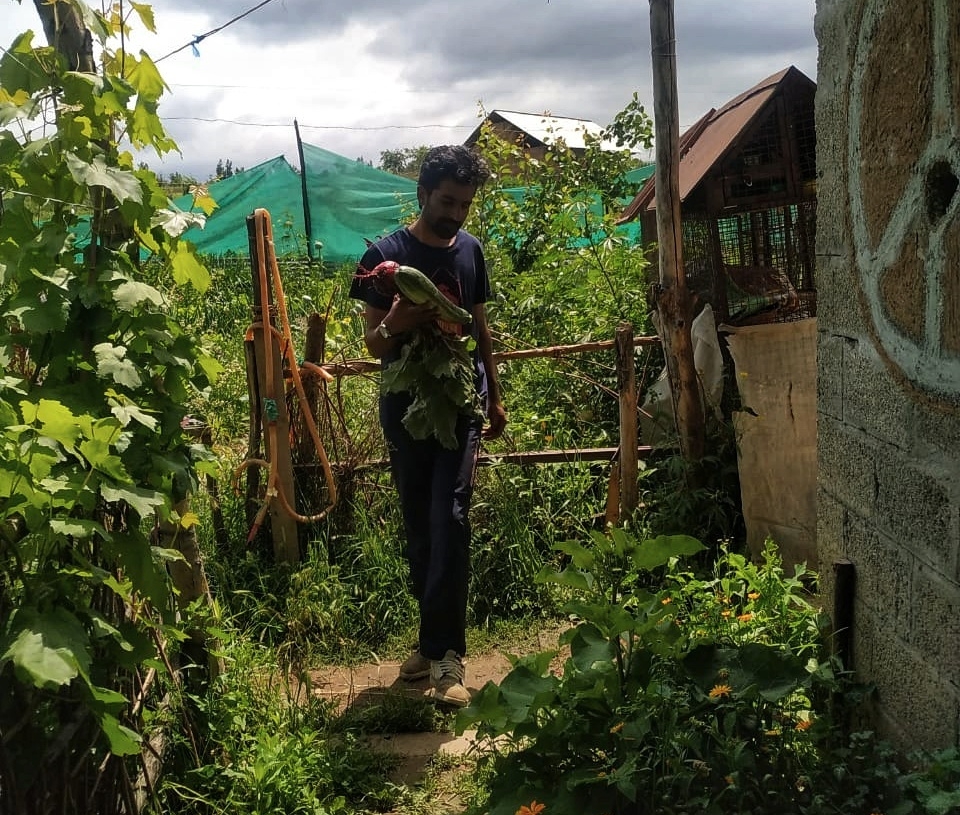 Srinagar: Twenty years ago, thick serpentine coils of greyish black smoke rose from the slits of the brick kiln in the remote Mahwara village of Budgam district.

Who would have imagined lush greenery sprinkled with exotic vegetable and fruit trees would emerge on the same spot one day?

Thanks to a young farmer from the vale who transformed it into an organic farm, known as Permaculture Kashmir Valley.

Eight years ago, Saalim Nazki (32) decided to breathe new life into the 5445.0 square feet of a land marred with the ashes, brick remnants, and dead soil by adopting the methods of permaculture.

Saalim was joined by his younger brother, Muneeb Nazki (29) and Maumoon Ahmad Lone (26) who assisted him in day-to-day running.

“It has been a long journey since then but our toil and turmoil finally bore fruit,” Saalim said.

Permaculture is an attempt to best use land so that generations in the future can continue to make use of the land in productive manners, allowing for personal subsistence. It draws from several disciplines including organic farming, agroforestry, integrated farming, sustainable development, and applied ecology.

It was Saalim, an MBA from Wales University, who developed an interest in nature and started browsing on the internet about alternate living away from capitalism and found permaculture. His search was over when he found land in Budgam where a brick kiln was earlier situated.

Saalim said the idea was to switch from the slash-and-burn model of agriculture to a gentler, more permanent formula where fruit trees shade vegetable patches, perennial plants grow, are picked and plucked from, perish, form mulch, feed other plants, and start over.

“Where birds can eventually make their homes — traditional agriculture is notorious for not supporting other life forms; where bees and insects thrive, and eventually small animals arrive to nibble or hunt,” he said.

But producing various flora on the dead land came with various challenges for the young farmers.

“The soil was de-generated to the extent that when we used to grow onions initially, the red brick remnants also came out with the vegetable produce,” Maumoon said.

With time, the trio became well-versed with various techniques involved in this type of farming.

“For instance, we don’t use tractors on the farm. We put cardboard on the soil and make holes in it for the saplings. This is to prevent weeds from growing. The idea is to show people how you can regenerate soil by using less labor-intensive techniques,” Muneeb said.

“We cannot engage in mono-culture and grow the same type of fruit and vegetables everywhere. Because that’s what attracts you to buy pesticides and insecticides as you want a large production. The design system we have created is not run after the yield but rather create a sustainable form of land,” Maumoon said.

The trio plans to help people design their gardens and backyards and teach the interested farmers about the permaculture techniques in the future.

“We are already working as designing consultants for some clients who have space and help them connect with nature in an organized and sustainable way,” Maumoon said.

Besides, the farm is already haute-spot among the farmers in Budgam.

“The agriculturists keep on visiting us to learn about growing exotics. Roughly, around 300 farmers must have benefited from the methods adopted by us so far,” he said.

Muneeb said they have renovated an old run-down structure on the farm. “It should become a place where you can practically see how to evolve land and trees and plants sprouting everywhere,” he said.