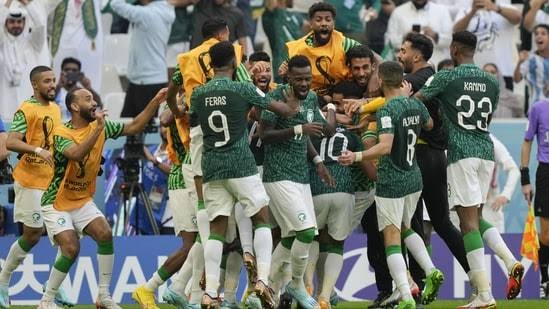 Messi gave the Copa America holders an early lead from the penalty spot but Saleh Al-Shehri equalized early in the second half and Salem Al-Dawsari struck a sensational winner.

Saudis scored twice in a six-minute span to start the second half and take the lead. Argentina tried hard in the second half but could not change the course of the game.

Saleh Al-Shehri scored the first goal for Saudi Arabia in the 48th minute. It felt after his goal that Argentina would simply respond with another and all would be back to normal.

Argentina’s best chance to tie the game might have come in the 101st minute but Julian Alvarez’s header was saved by Mohammed Al-Owais.

Argentina was one of the favorites to win the Qatar World Cup this year after Brazil. There were many firsts to Saudi Arabia’s credit. The Kingdom’s team broke the 36-game unbeaten streak of Argentina.

That streak included a win in the 2021 Copa America tournament over Brazil to give Lionel Messi his first major international trophy.

Argentina found the back of the net four times in the first half but three of those goals were called back because of offsides infractions.

Argentina can still stay in the game. However, it has to win both matches against Mexico and Poland.

If Argentina does beat Mexico and Poland it will likely safely advance to the knockout stage with six points. But a win and a tie in those two games may not be enough depending on what happens later on Tuesday when Mexico and Poland play. If there’s a winner in that game, Argentina will assuredly need to beat the victor to have a chance at not going out in the group stage.