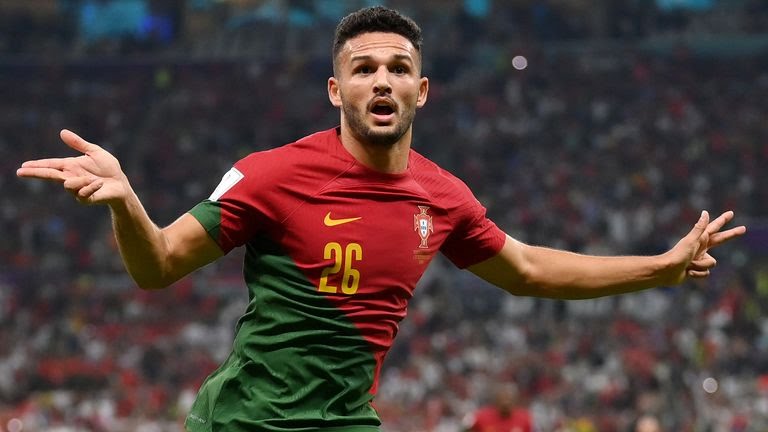 Doha: A hat-trick from Benfica striker Goncalo Ramos helped Portugal to coast to an emphatic 6-1 win over Switzerland and set up a quarter-final clash with dark horses Morocco.

On Tuesday at Lusail Stadium in Qatar, the 21-year-old striker, who replaced Cristiano Ronaldo in the starting lineup, scored three decisive goals in the 17th, 51st, and 67th minute to notch the first hat-trick of the tournament and live up to the faith reposed by Portugal coach Fernando Santos.

Pepe handed the captain’s armband in the absence of Ronaldo who was left on the bench by Santos, who scored the second goal for Selecao das Quinas in the 33rd minute. Raphael Guerreiro was also on target for Portugal scoring the fourth goal for his team in the 55th minute.

Switzerland pulled one back in the 58th minute with Manuel Akanji scoring a consolation goal.

Thereafter, Portugal brought in Ronaldo in the 73rd minute as a substitute much to the roar of the crowd but he could not add his name to the scorers’ list, instead, it was Rafael Leao, who added a sixth one in the injury stoppage time to complete a resounding win.

Portugal meant business in the last 16 tie and the absence of Ronaldo in the starting eleven had no effect on the level of performance. Using the two defenders on the wings as an attacking option, Portugal took the attack into the rival camp and with Joao Felix serving as a perfect link between the defence and offense.

Felix was not afraid to move deep in Switzerland with his dribbling skills and also had the foresight to slice open the defence with his prodding runs in the rival half. He also fell back and also showed his defending skills along with his offensive ones.

The man was everywhere. He was orchestrating play from deep in the pitch, making darting runs in from the wings, and has been dragging Swiss players out of position all night. They could not cope with his movement. Bruno Fernandes and Bernardo Silva also pulled the strings in midfield and supplemented Felix’s work.

After the much-attacking play, Portugal opened the scoring with a gem of a goal from Ramos, who beat Switzerland keeper Yann Sommer with a thunderbolt. He received the ball with his back towards the goal, took a touch to turn, and let fly and it took off with incredible venom and flew into the top corner, 1-0.

Ramos, who had three international goals before going into the match having scored his first goal for his country in a November 17 friendly against Nigeria, where Portugal clinched a 4-0 win, scored with just 17 minutes on the pitch.

Ramos, who plays in the Portuguese Primeira Liga has been in terrific form this season, scoring 14 goals and six assists for his club this season across all competitions and is also the top scorer in the league, with nine goals in 11 appearances.

Portugal added a second one through 39-year-old Pepe, who finished off the set piece with a towering header from a corner taken by Bruno Fernandes to double the lead, 2-0.

Ramos, a product of Benfica’s youth academy, scored his second one of the night as he met a hard, low cross of Dalot and darted in to guide it at the far post for Portugal’s third, 3-0.

Defender Guerreiro, who time and again joined the attacking flock got his name on the goal scorers list, finishing off a move with another thunderbolt after set up by Ramos, 4-0.

Three minutes later, Akanji made it 5-1 pulling one back for the Swiss, tapping home a corner at the far post which traveled above everyone’s head and ended at the feet of the Swiss striker, 4-1.

Ramos added his personal third catching the Swiss defence napping as he latched on to a pass from Felix inside the box and chipped over the onrushing Sommer to make it 5-1.

Leao completed the tally with an injury-added goal for Portugal with another beauty of a goal, as he found space on the left wing, cut back, and let fly from the corner of the box with Sommer only able to see it fly over him into the goal.

Portugal takes on Morocco in the quarter-finals on Saturday and join The Netherlands, Argentina, Brazil, France, England, and Croatia in the last eight stages of the tournament.