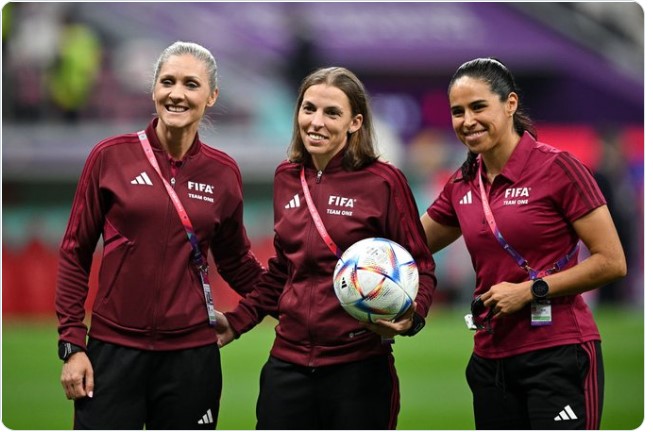 Frenchwoman Stephanie Frappart, 38, referee the men’s World Cup, in the group-stage match between Costa Rica and Germany. Frappart was joined by the assistant referees— Brazilian Noiza Pak, and the Mexican Karen Diaz Medina, as the first women’s referee team in the history of the tournament.

It is not new for Frappart to achieve unprecedented titles, as she was the first woman to assume the task of arbitration in the European Super Match between Liverpool and Chelsea in the 2019 season.

FIFA announced that the trio of Stephanie Frappar, Noiza Pak, and Karen Diaz will become the first all-female refereeing team to officiate a men’s World Cup match as they were chosen to take charge of the Group E match between Costa Rica and Germany on Thursday.

Stephanie Frappart, Rwandan Salima Mukansanga, and Japanese Yoshimi Yamashita were included in the list of 36 referees chosen by FIFA for the Qatar World Cup.

The three arena referees were chosen, in addition to the assistant referees, who are the Brazilian Noiza Pak, the Mexican Karen Dias Medina, and the American Kathryn Nesbitt, after they proved themselves in the men’s game.