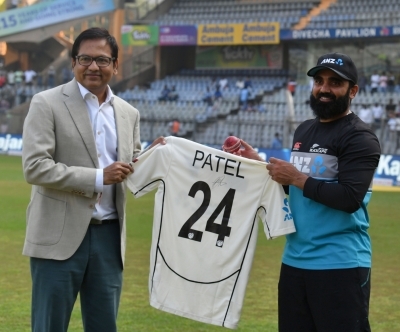 Felicitating New Zealand spinner Ajaz Patel at Wankhede stadium for his heroics during the second Test match against India is a memory that Mumbai Cricket Association (MCA) will keep for a long time, says cricket body’s president Vijay Patil. The Mumbai-born 34-year-old Ajaz became only the third bowler in Test history after Jim Laker (1956) and Anil Kumble (1999) to take all 10 wickets in an innings of a Test match, earlier this month at the Wankhede Stadium in Mumbai.

An avid patron of sports, Patil lavished praise on New Zealand spinner Ajaz Patel after he handed over the ’10-wicket’ ball and his autographed ‘T-shirt’ he wore in the second Test match for the MCA’s museum.

“He was quite generous in terms of making sure that he would give us that special T-shirt and cricket ball for the museum which is being developed by the Mumbai Cricket Association,” said MCA president.

“We were very fortunate that Wankhede stadium has given us so many historical moments. And, this is another memory that we will keep, and we can take away from the ground. It is a fact that it happened in Mumbai. Test matches are always an extraordinary occasion and Mumbai is a very special place in the cricketing calendar of our country. We have witnessed the history being made at the Wankhede.

“Ajaz has roots in Mumbai, so we could identify with the success he achieved. He was extremely delighted with an incredible performance. It was just amazing efforts by Patel,” he added.

Sensing the need for academies for budding cricketers who are living far from Mumbai city, Patil said that MCA is planning to open many academies in suburbs.

“Talent scouting is another area which we are paying special attention to. I just wanted to say that cricket inherently becomes more competitive, we have so many cricket associations, cricket infrastructure being created all around the country. Many emerging stars are coming from smaller towns across India. And this is actually a very healthy sign because it shows that people from all regions of the country compete to be a part of the national team,” said Patil who is instrumental in establishing the state of art Dr. DY Patil International Sports Stadium.

The DY Patil Stadium has been rated as one of the six best stadiums in the world and has been honoured with the ‘Best Stadium Experience’ award during the IPL Awards 2010.

“There is no lack of cricketing talent in this region. Honing the skills of youngsters with state-of-the-art facilities in Dr. DY Patil International Sports Stadium will definitely help in tapping the cricketing talent for state and country. Our main focus would be how we can produce the best talent. And we continue to have great players representing not only Mumbai but the nation in the future,” he signed off.

A runny nose and itchy throat? It may be Omicron, says study