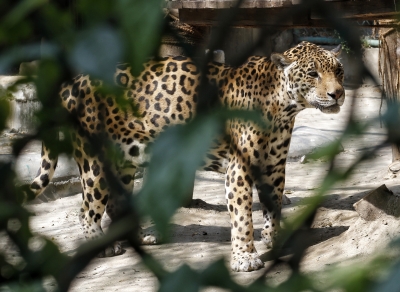 Srinagar: Two days after a leopard killed a girl in north Kashmir’s Uri border town, a 7-year-old boy was picked up and killed by the same animal when he came out of his makeshift home in the highland pastures in the same general area.

There has been an explosion in the wildlife population including leopards, bears, jackals and other species during the last 35 years, experts say.

“Due to militant violence, poachers do not dare go into the forests for fear of the security forces.”

“This has helped increase wildlife species including leopards, bears, jackals and birds in addition to the world-famous Kashmir ‘Hangul’.

What has brought Man and animal into direct conflict in Kashmir during recent years when killings by wild animals and injuries to villagers have increased many times?

“The ecological struggle for survival and space is one chief reason for the increased man-animal conflict.

“The ever-increasing human population has forced human beings to push further and deeper into the natural habitats of the wild animals.

“In fact, it is not as much the case of the wild animals encroaching into the habitats of the humans as it is the other way round.

“New human settlements have come up right into the hitherto natural habitats of the wildlife. Houses have been built deep into the forests coupled with grazing and felling of trees that have literally pushed wild animals to the brink.

“What alternative is available to us if someone creeps into our homes? We would retaliate and that is precisely what the wild animals are doing”, Naqash said.

The wildlife warden said his staff is overstretched catching wild animals like bears and leopards who often prowl inhabited places in both urban and rural areas.

“We have to use nets, non-injury causing traps and tranquiliser shots to catch such animals and re-locate them into their habitats.

“All this requires sufficient manpower and professional skill. We usually catch the prowling wild animals and then release them into their natural habitats.

“But, if some wild animal has a history of attacking humans more than once, we keep them in the rescue centres till they are certified not to be maneaters and fit to be released in the natural habitat”, the wildlife warden said.

How professional and delicate is the operation to relocate a wild animal that has a proven human killing to its account can be visualised by the directions, the regional wildlife warden had to pass on to his ground staff on September 23, 2022, following the killing of the girl child in Uri area.

“Establish camps on a 24X7 basis at different locations in the pastures and in areas having the probability of the presence of the animal involved in child lifting.

“Door-to-door awareness drive should be intensified in vulnerable areas. Issue advisories and paste these at vantage points.

“Involve local religious leaders, Sarpanchs and Panchs in awareness programmes and seek their recommendations as well.

“Keep a close liaison with police and the district administration for any eventful happening and inform immediately for any assistance required.

“In case all efforts fail to catch or tranquilise the animal alive, may comply all the directions contained in the killing permission order issued by the competent authority after scientifically establishing the identity of the particular animal”.