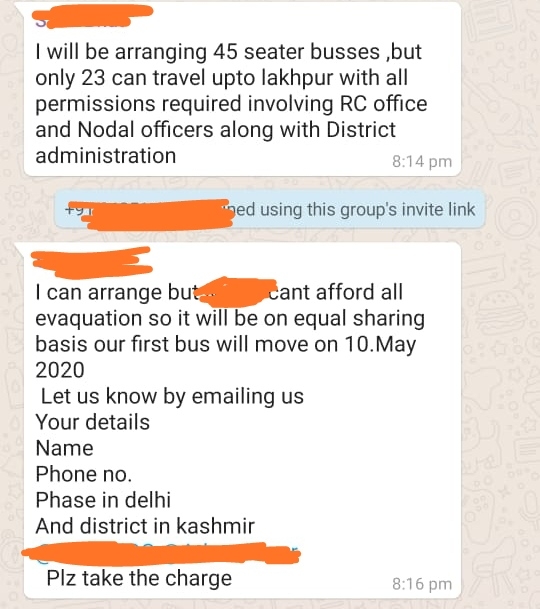 The WhatsApp group the NGO is running in which those stranded are informed about the travel plans and fares. (Screenshot arranged by KM)

Srinagar: Divisional Commissioner, Kashmir, PK Pole on Friday promised action against Delhi-based NGO for fleecing stranded students and employees on the pretext of sending them home.

This follows the expose’ by The Kashmir Monitor about a Delhi based NGO headed by a Kashmiri woman who is demanding huge money from distressed students for facilitating their travel to the valley under the garb of patients.

“If details are shared, we will take action against them.  Stern action will be taken if they are exploiting the people on the pretext of sending them home,” Pole told The Kashmir Monitor.

According to The Kashmir Monitor expose, agents in New Delhi are camouflaging as philanthropists and exploiting the plight of stranded people by charging them hefty sum for facilitating the travel to Kashmir. Bypassing all the rules and regulations, a woman who runs an NGO has a rate card for different modes of travel.

She not only manages passes but also arranges transport. Even some people have been transported in ambulances after projecting them as patients.

The expose comes on the day when Jammu and Kashmir government has decided to run special trains to bring back stranded people from different parts of the country.

“Train services are being arranged for the stranded persons of J&K, particularly from far off places. The trains will start arriving shortly. Necessary coordination with the sending states as also with the railway authorities is going on. Nobody should move in a hurry and without passes. Else they will be quarantined for 21 days in Kathua”, said a nodal officer for the movement of stranded people in a statement.

The government has decided to bear the cost of tickets of all the stranded people.  “The returnees need not make any payment for their journey by train,” he said.

The nodal officer said the government has collected details of stranded persons who wish to return to J&K by providing web links for registration.

Official figures reveal that 30000 persons have entered J&K with proper regulation via Lakhanpur. “Migrant workers, students, and stranded persons from Himachal Pradesh and Punjab have already returned to J&K. The people stranded in Haryana, Uttarakhand, Chandigarh and Delhi have been permitted to return in a regulated manner from May 7 and this process will continue for a week,” he said.