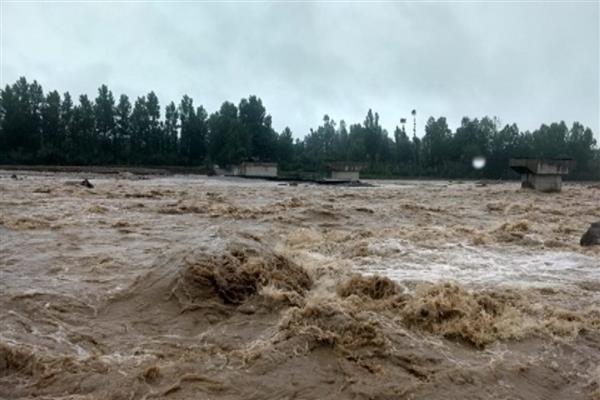 Srinagar: With an unusual spike in extreme weather events, Kashmir is bearing the effects of climate change.

What are extreme weather events?

Extreme events are occurrences of unusually severe weather or climate conditions that can cause devastating impacts on communities and agricultural and natural ecosystems. Weather-related extreme events are often short-lived and include heat waves, freezes, heavy downpours, etc.

When did the erratic weather patterns become more frequent?

The first week of November in 2018 and 2019 surprisingly both witnessed untimely snowfall. It resulted in huge devastation to the horticulture sector.

This was followed by harsh winter conditions in 2020 and 2021. Plummeting temperature leads to the freezing of supply lines, taps, water tanks, and motors. This resulted in a water crisis. In the South Kashmir district of Shopian, the temperature went down to as low as -15 degrees Celsius. In the Kulgam and Pulwama districts of south Kashmir, the temperature was recorded -12 and -10 degree Celsius respectively.

Another dramatic shift happened in 2022 when winter remained mostly dry and a snowless Chillaikalan was observed. In February, some snowfall was recorded and early flowering was observed.  The month of March, which is considered to be the wettest month in terms of rainfall, was almost 10 degrees warmer compared to the previous years.  It leads to early snow melt in alpine landscapes.

The month of April too witnessed above-normal temperatures and incidents of a severe heatwave. As the result, Jhelum, nallahs, and springs witnessed a considerable decrease in water levels. By May-end, some small nallahs had dried up completely.

Where are we now?

Heavy rains over the past four days have led to a rise in the level of most water bodies in Kashmir with flood alarms ringing in Srinagar and other parts of the valley.

What do scientists say?

Senior Assistant Professor Department of Geoinformatics, University of Kashmir, Dr. Irfan Rashid told The Kashmir Monitor that the erratic weather is likely to make weather forecasting an increasing challenge in the future.

“The changing weather dynamics will greatly impact the agriculture and horticulture sector. From long dry spells to excessive rainfall, 2022 has so far been a year of extremes. It points to the impact of climate change,” Rashid said.