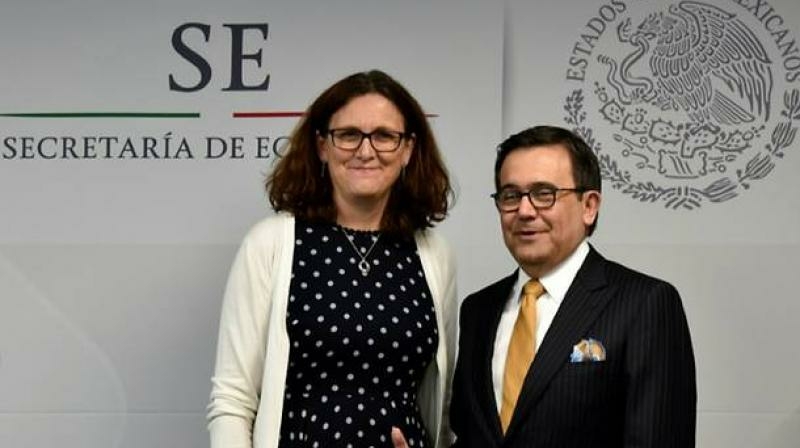 Mexico City: The EU and Mexico said they had reached an “agreement in principle” to modernise a free-trade deal sealed in 2000 between Brussels and the Latin American country.

“Our negotiators will now continue their work to resolve the remaining technical issues and finalise the full legal text so that our citizens and enterprises can start reaping its benefits as soon as possible,” said a statement co-signed by EU Trade Commissioner Cecilia Malmstrom, her agriculture counterpart Phil Hogan, and Mexico’s Economy Minister Ildefonso Guajardo Villarreal.

The agreement is seen as sending a strong signal to US President Donald Trump who in 2017 launched renegotiations of what he has previously referred to as Mexico’s “cash cow” — the North American Free Trade Agreement (NAFTA).

The move has stoked tensions and uncertainty among signatories to the deal, which also include Canada.

The EU and Mexico said their agreement had been reached after “months of intense negotiations”.

“This will contribute to making our trade relationship fit to face the opportunities and challenges of the 21st century,” the statement said.

“The European Union and Mexico stand together for open, fair and rules-based trade.”

The parties did not reveal further details of the deal, or specify whether it needs to be approved by the European Parliament.

Negotiating teams had begun final discussions in Brussels on Monday, with the deal being modelled on a recently agreed trade deal between Canada and the EU.

Earlier this week, the EU said it was leading the defence of free trade in the face of US “protectionism” as it also unveiled plans to fast-track deals with Japan and Singapore.