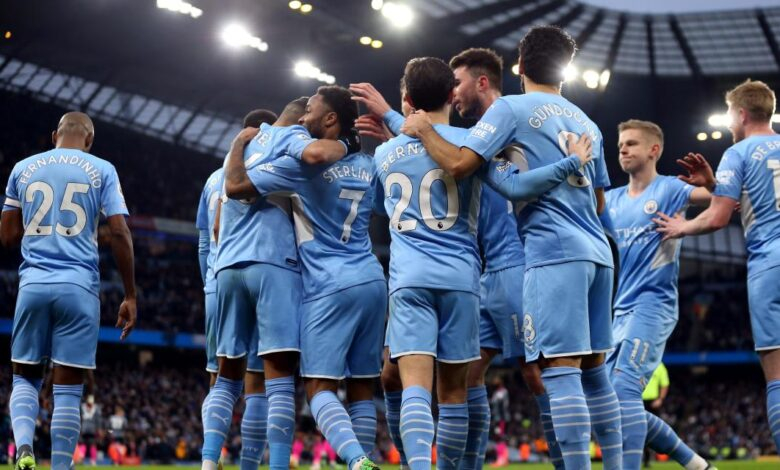 Manchester City defeated Leicester 6-3 in a thriller to reach the top of the Premier League table.

In an extraordinary game at the Etihad that will live long in the memory, City were 4-0 up inside 25 minutes thanks to goals from Kevin De Bruyne, Ilkay Gundogan, Riyad Mahrez, and Raheem Sterling, before Leicester hit three goals in the space of ten second-half minutes to turn the contest on its head.

But Aymeric Laporte’s emphatic header made it 5-3, before Sterling scored his second late on to seal the victory.

It was chaotic, breathless, and thoroughly entertaining – the highest-scoring Boxing Day fixture in the Premier League era.

City started superbly and it was no surprise we took the lead within five minutes after a sustained period of pressure right from kick-off. It was Kevin De Bruyne who got it, controlling Fernandinho’s lofted pass into the area and taking another touch to set himself before unleashing a fine left-footed drive past Kasper Schmeichel in the Leicester goal.

City’s lead doubled soon after when Youri Tielemans was adjudged to have dragged Aymeric Laporte to the ground inside the area. Former Leicester forward Riyad Mahrez smashed the ball into the top corner from the resulting spot-kick.

Leicester stabilized and began to come into the contest. Ederson made an outstanding save to deny James Maddison, whose free-kick was going in before the Brazilian pushed the ball onto the bar, and seconds later he made another decent stop to deny Ayoze Perez.

But the victors’ threat was short-lived. Bernardo, De Bruyne, and Joao Cancelo put together a fine passing move down the right to open up the Leicester backline, and although Cancelo’s dangerous low ball across the area was parried by Schmeichel, Ilkay Gundogan was there to finish expertly and make it 3-0.

Three minutes later and Tielemans had given another penalty away, this time tripping the exceptional Raheem Sterling as the City forward advanced towards goal. It was Sterling himself who stepped up to take the penalty, and he blasted home with the same self-assurance Mahrez had done earlier in the game.

Leicester looked discombobulated, with City rampant and 4-0 ahead after 25 breathless minutes.

Schmeichel’s save denied what would have been a wonderful team goal, diving to his left to make a brilliant stop from Sterling’s close-range volley after Bernardo had cushioned the ball into his path from De Bruyne’s pass. It would have been the goal of the game.

The game looked dead and buried, but a remarkable three goals in ten minutes saw Leicester get themselves right back into the contest.

Maddison tapped home ten minutes into the second period after a fine-flowing move. Remarkably, Brendan Rodgers’ side has now both scored and conceded in each of their last 16 Premier League away games.

Ademola Lookman added another after a brilliant pass into his feet from former City striker Kelechi Iheanacho.

Daniel Amartey cleared Fernandinho’s header off the line as City looked to reassert control, but Leicester immediately went up the other end and scored another. Maddison’s long-range effort was tipped onto the bar by Ederson, but Iheanacho was there to tap home Leicester’s third.

The next goal would prove crucial and it was City who got it when Aymeric Laporte powered a header into the top corner from Mahrez’s corner.

That goal clipped Leicester’s wings, but they could have had another with 12 minutes remaining. However, Marc Albrighton somehow missed the target with his back-post header with the goal gaping before him.

And with three minutes remaining, Sterling, the man of the match, made it 6-3 with a close-range finish.

After a difficult start to the season because of injury and a bout of illness, Kevin De Bruyne was back to his best.

Two goals against Leeds and a standout display at Newcastle suggested he was revving back into gear, and against Leicester, he once again looked imperious.

His goal to open the scoring was superbly taken and his range of passing was outstanding. He was dictating the tempo, with his ability to get on the ball and create a key facet in City’s game.

It’s wonderful news for City and ominous for the rest of the Premier League: Kevin De Bruyne is very much back in premium form.

City is just the third side to score two penalties in the opening 25 minutes of a Premier League match, after West Ham v Manchester United in 2011 and Liverpool v Sheffield United in 2007. City is the first of those three to do so with two different scorers.

With Liverpool’s Boxing Day game at home to Leeds United postponed, City now has a six-point lead at the top of the Premier League. Third-placed Chelsea, who are nine points behind City, play this evening away at Aston Villa.