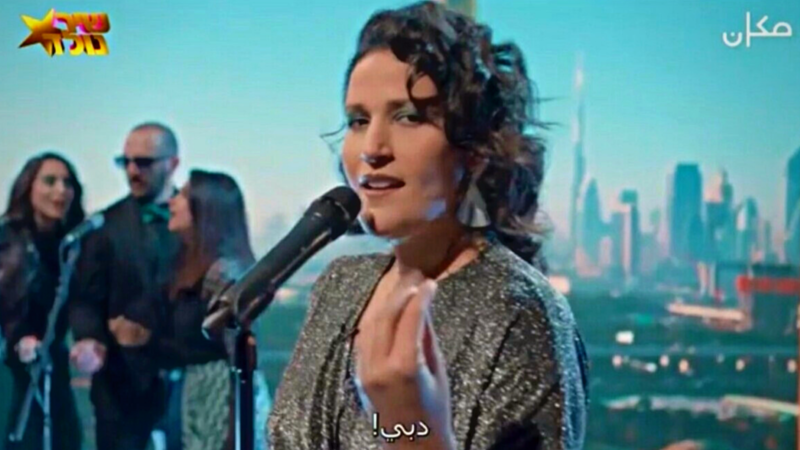 An Israeli comic who sarcastically proposed to Saudi Prince Muhammad bin Salman has come up with a new song highlighting Israel’s colonial brutality and ruthless cruelty that has displaced several Palestinians.

Titled Dubai, Dubai, and sung by Noam Shuster-Eliassi, the satirical song has highlighted the “political bond” between the United Arab Emirates (UAE) and Israel.

The UAE is often considered to be representative of Arab views and concerns. However, in recent years, the political relations established between the two countries have caused quite a stir in many countries.

In her song, she emphasizes Israel’s colonial brutality and ruthless cruelty that has displaced several Palestinians in favor of illegal settlements for foreign Jews.

Eliassi, who is fluent in Arabic, sang her “controversial” song on the Arabic-language station Makan 33.

“There is nothing better than Arabs who have millions and forgot about Nakba. They forgot about Palestine,” the comedian sings.

The powerful lyric brings the Palestinian exodus to the world’s attention. Nakba, also known as the Palestinian catastrophe, is the mass displacement and forcible destruction of Palestinian homes and land by Israeli forces in 1948.

“Dubai, Dubai. Burning the consciousness of Arabs. And just like Dubai, they forgot the blockaded Gaza.”

This powerful lyric reminds the audience of the raid that happened in Al-Aqsa last summer. The bombings that occurred in Gaza following the raid are another testimony to Israel’s cruelty towards Palestinians.

The song caused a stir and divided sentiments online.

Abier, a Palestinian Twitter user, tweeted her amusement at the fact that the song will infuriate Emiratis.

In a response to Abier’s tweet, another social media user Ahmed Ghanim offered more information on the song, stating that it is a mix of Hebrew and Arabic.

This is not the first time that the comic has received a lot of attention online. In 2019, she sarcastically proposed to Saudi Prince Muhammad bin Salman.

Eliassi, who refuses to be reduced to nationality, has always vocalized the Palestinian plight and sees herself as a comedian for Israeli and Arab relations.