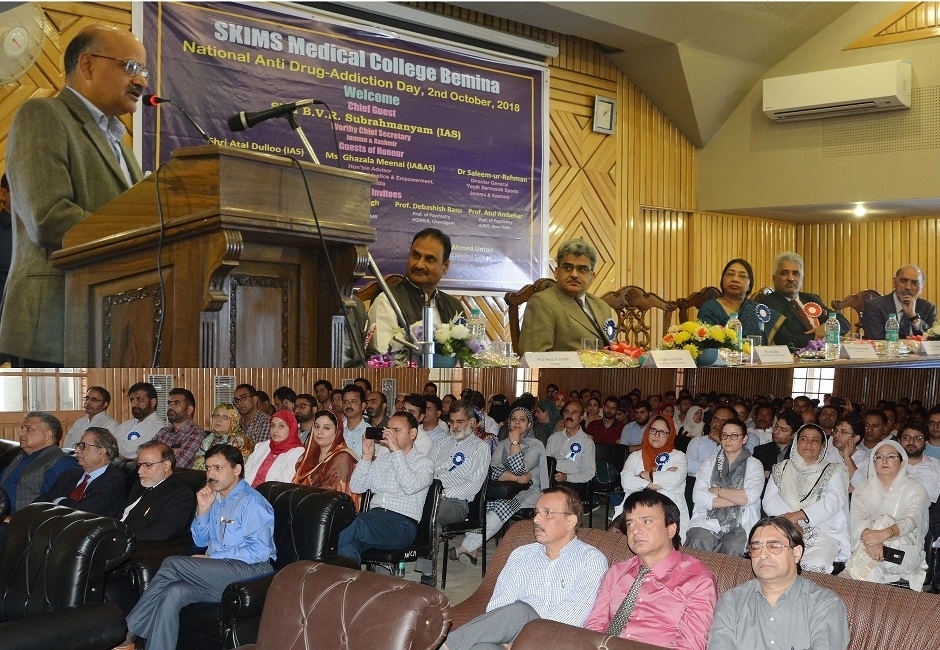 Srinagar, Oct 2: Chief Secretary BVR Subrahmanyam Tuesday urged the civil and police administration of the State to adopt a more humanitarian approach while dealing with patients of substance abuse.

“Victims of substance abuse should be treated as patients who need care and not as offenders or culprits. We have to reach out to them by adopting a humanitarian approach and counseling them in order to eradicate the menace of substance abuse. The victims should be rehabilitated properly and returned to the society without scars of past,” he said.

The Chief Secretary was speaking at a function organised by SKIMS Medical College Bemina to commemorate the National Anti-Drug Addiction Day.

The function was also attended by Principal Secretary, Health and Medical Education, Atal Dulloo and Advisor, Ministry of Social Justice and Empowerment, GoI, GhazalaMeenai among other officers.

Dulloo said the substance abuse is a multi-dimensional phenomenon with social, legal, economic and medical ramification, “It needs serious attention. The state will soon have a drug de-addiction policy which will focus on three things: prevention by awareness, integration and strengthening of facilities of drug de-addiction and community rehabilitation,” he said.

Subrahmanyam stressed the civil and police administration to create awareness among the masses about the harmful effects of substance abuse. He called for strict and coordinated action against the people involved in selling banned drugs to youngsters.

“Drug industry fuels a whole criminal class which can destroy the foundations of a civilised society. We are witnessing lots of cases in J&K where consignments of banned drugs are seized,” he said.

The Chief Secretary said the state of Jammu and Kashmir is doing reasonably well in terms of economic condition of the society, “No one sleeps with empty stomach in Kashmir but people, especially youngsters, get trapped due to apparent lack of growth and avenues in this low-prosperity stage and that is when they can fall for drugs,” he said.

Complimenting the management and the staff of SKIMS Bemina, the Chief Secretary said he will back the decisions taken by the SKIMS’s Governing Body and the Government will go out of way to support developmental works at the institute.